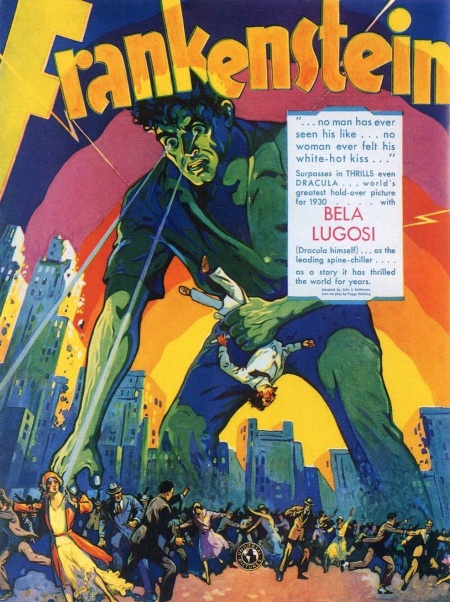 Much speculation has been made as to why Bela Lugosi was replace by Boris Karloff as the creature in Frankenstein. His own explanations are unreliable. Perhaps closest  to the truth is that James Whale simply felt that Lugosi, already indelibly linked to the character of Dracula in the minds of many, was not the right actor for his conception of the creature. As recounted in James Curtis’ A New World of Gods and Monsters (University Of Minnesota Press, 2003), interviewer Gavin Lambert recalled Whale’s thoughts on Lugosi in relation to the creature, “He talked about the fact that Lugosi was basically scary and scared audiences, and he said the Monster, in his view – although he could scare people – was also scared.”

Hollywood, March 31. On returning from Honolulu, where he went in place of Warner Oland on Fox’s “Black Camel,” Bela Lugosi will probably sign with Universal on a term contract.

Lugosi’s success in “Dracula” is the principal reason for U’s wanting him. The studio has other parts in mind, one of them being in “Frankenstein,” medical melodrama.

Bela Lugosi, who played the title role in “Dracula,” has been assigned by Universal to play the lead in “Frankenstein,” the thriller which Hamilton Deane is now playing in England and which may possibly be seen in this country on the stage before it appears in pictures. Carl Laemmle, Jr., has placed Lugosi under a long term contract and it is likely that the actor will also play in “The Murders of the Rue Morgue.”

THE air at Universal City is thick with rumors about the contemplated productions of “Frankenstein” and Poe’s “Murders in the Rue Morgue.” The real news, though, is limited to the announcement that Bela Lugosi, who played the title role in “Dracula,” will have the lead in Mary Shelley’s macabre story and probably also in the Poe story.

Bela Lugosi, the star of the screen version of Dracula, will play the principal role in Frankenstein, another thriller, and perhaps in The Murders in the Rue Morgue.

Having made a success of “Dracula,” Universal is going in strongly for macabre subjects. They recently purchased the rights to “Frankenstein,” a blood-curdler now being played on the London stage, and “The Murders in the Rue Morgue,” Edgar Allan Poe’s horror melodrama. Bela Lugosi, who did so well with the role of Count Dracula, has been assigned the leading role in “Frankenstein.” At present Lugosi is en route to Honolulu where he will join the “Black Camel” company in an important role.

Bela Lugosi will be kept in nightmare parts similar to that in “Dracula.” Universal has readers looking for more parts of that type for Lugosi, the readers rummaging through old stories.

Studio already has “Frankenstein” for the actor.

The continuous triumphs which have been scored by Bela Lugosi in the title role of “Dracula” have resulted in him signing a long term contract with Universal. This will insure his appearance in “Frankenstein,” the successor to “Dracula” in next year’s Universal lineup.

Lugosi Signs With “U” On Long-Term Contract

Bela Lugosi has been put under a long-term contract by Universal. He will put on the make-up for Universal’s “Frankenstein,” after which he will do the leading role in Murders in the Rue Morgue,” adapted from Edgar Allen Poe’s short story of the same title.

Bela Lugosi came back to a surprise after three weeks spent in Honolulu with “The Black Camel” company. His manager signed him on an advantageous long term contract with Universal while he was away. He starts immediately on “Frankenstein,” which will be followed by “Murders in the Rue Morgue.” By the time these two are finished the reading department expects to have some more horror tales run down for the man who made “Dracula” a household word.

…George Melford will direct “Frankenstein”; Bela Lugosi is the star…

Bela Lugosi has completed work in “The Black Camel,” and will begin shortly in “Frankenstein.” Lugosi seems to be the logical actor for such mystery roles, after his success in “Dracula.”

BELA LUGOSI HAPPY WHEN HE IS WORKING

Bela Lugosi knows what hard work is. He is finishing The Black Camel, and Universal is waiting for him to start shooting on Frankenstein.

“I like to be busy,” he says. “Nothing creates such a joy of living as being active. I recall the dull times when I first came to Hollywood, and producers did not know me, and I rejoice each morning that I hear the early alarm.

SOMETHING has got to be done for Bela Lugosi. Lugosi has been trying for a week to make a screen test for “Frankenstein.” He has to wear a weird makeup, with two or three different colors, stripes, streaks and striations.

But after a few blasts of hot air, the makeup all fuses together, making him a clown instead of a menace.

…Due to freak camera work, Bela Lugosi will appear eight feet tall in his forthcoming characterization of “Frankenstein.” 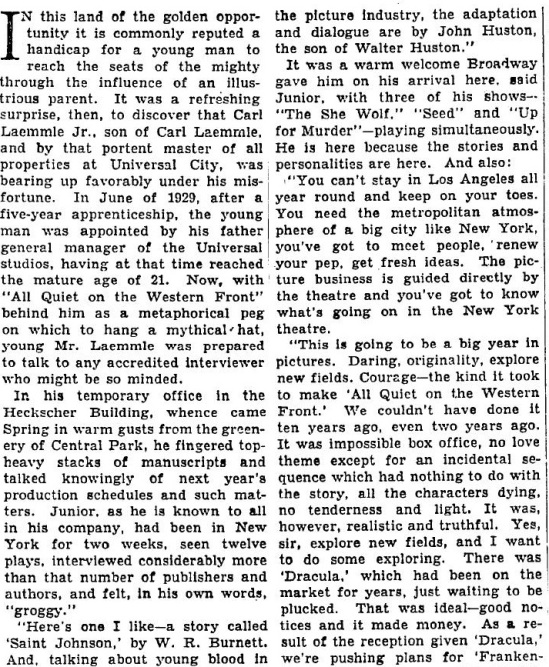 Bela Lugosi begins work soon on “Frankenstein,” playing the name role at Universal. He is now studying makeup for the part.

LUGOSI GETTING PADDED UP AS MAD MONSTER

HOLLYWOOD, June 27 (A.P.) – What probably will be one of the trickiest jobs of makeup since “The Hunchback of Notre Dame” will be seen when the picture “Frankenstein” is released.

Bela Lugosi, in the starring role, will be built up with makeup and padding, to resemble the eight foot superman Mary Goodwin Shelley, wife of poet Percy Shelley, wrote about in 1817.

When Lugosi is made up only his chin and eyes will be visible, grease paint and putty completely hiding the rest of his face. Shoes to which nearly 12 inches have been added will help complete the illusion.

Mrs. Shelley’s fantastic story concerns the creation by a medical student of a man monster.

You can almost imagine what happens when this ruthless giant sets out to have a little fun.

Another film for fall release should be less disquieting than “Frankenstein” but hair raising nevertheless, is Poe’s “Murders in the Rue Morgue.” It is being changed a great deal from the original in order to bring in a romance.

Its adaptation is being written by the Russian Leo Birinski, who has written “Variety” and “Mati Hari” for the movies.

Birinski believes that motion picture audiences want to see people in idealistic situations, so he is trying to combine his theory with those of Hollywood, the latter consisting of picturing everything as it really is – or almost so.

When James Whale finishes “Waterloo Bridge” he will direct “Frankenstein,” famous old thriller which Garrett Fort is adapting for Universal. Whale, who directed the English stage production of “Journey’s End,” was brought to Hollywood for the talkie version of the unforgettable war play. “Frankenstein,” by the way, is one of the weirdest novels in the English language. It was written long before movies were dreamt of, by Mary Wollstonecraft Shelley, wife of the poet Percy Bysshe Shelley. Bela Lugosi, who played the title role in “Dracula,” is in “Frankenstein.”

James Whale Renews at “U”

As a result of his work on “Waterloo Bridge,” Universal has taken up the option clause in James Whale’s contract. His next will be “Frankenstein,” with Bela Lugosi.

James Whale has been assigned by Universal to direct “Frankenstein” next. Garrett Fort has made the adaptation. Bela Lugosi heads the cast.

There’s been a lot of conjecture in Hollywood about who would take the place of Lon Chaney on the screen. Lionel Barrymore and Wallace Berry have been mentioned. It’s natural that Metro, where Lon finished his career, should hunt for the successor. But it’s natural, also, that Universal, where Lon started, should be in the running.

And Universal’s choice is Bela Lugosi who made “Dracula” a real box-office wow. Now in “Frankenstein” he’s playing the part of an “unborn” man – one designed by science, an eight-foot monster without sentiment. And only his chin and his eyebrows are to show on the screen.

The Universal production of Mary Shelly’s “Frankenstein” is taking shape under the knowing guidance of James Whale. Boris Karloff and not Bela Lugosi is the final choice to play the monster. Colin Clive has been imported from England to play the role of Frankenstein, the student who builds the semblance of a man out of bits of human wreckage and then, by an extraordinary light ray, endows the creature with life. This was a role which Lon Chaney all his life was anxious to play. Mae Clarke is the tentative choice for the role of Elizabeth. Frederick Kerr will appear as the Baron, Edward Van Sloan as the Professor and Dwight Frye as the Dwarf. John Boles, now recovered from the mishap which kept him out of “Strictly Dishonorable,” has been assigned the role of Victor.

There’s been a lot of conjecture in Hollywood about who would take the place of Lon Chaney on the screen. Lionel Barrymore and Wallace Beery have been mentioned.

Universal’s choice is Bela Lugosi who made “Dracula” a real box-office wow. Now in “Frankenstein” he’s playing the part of an “unborn” man-one designed by science, an eight-foot monster without sentiment. And only his chin and his eyebrows are to show on the screen.

The Grand Old Man of the Producers and some of his henchmen. Left to right: the director, James Whale, Bela Lugosi, Carl Laemmle, and Tom Mix.

(This undated photograph may possibly have been taken in July 1931 when James Whale was assigned to direct Frankenstein with Bela Lugosi still in the cast.)

HOLLYWOOD (UP) – Among the hazards of filmland is makeup “jitters,” the inability to sit still for hours at the time while experts apply the cosmetics and other tricks of their calling.

Although this may seem only an inconvenience to some people, the torture was so great for one actor that he lost the chance to gain world fame as a “horror” star.

Max Factor, Jr., noted makeup artist, is the authority for this story, which goes back to the days when a studio decided to make the picture “Frankenstein.”

Bela Lugosi, a Hungarian actor who had appeared in many mystery and horror plays on the stage, was to have had the role of the monster. But the part called for him to spend six hours daily having his makeup applied. And Lugosi could not stand the strain.

So Boris Karloff, who had been playing supporting roles in pictures for many years was given the part and became Hollywood’s leading horror-man, while Lugosi was forced to play more or less straight roles.