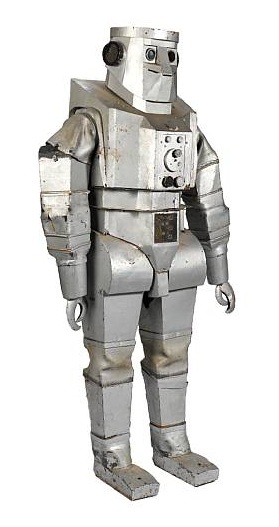 The robot costume from Mother Riley Meets The Vampire made a surprise and completely unexpected return to the spotlight when it was auctioned at Bonhams of London in December, 2010. Listed as lot No. 18 in sale 17974 of entertainment memorabilia, the costume sold for £1,680 ($2,747) . It had been in the hands of a private collector in the Birmingham area for over twenty years. According to the vendor, it had previously been displayed in the foyer of a Birmingham cinema. Neither the vendor nor Bonhams could confirm that the costume was the original. It was described in the catalogue as:

Perhaps not so surprisingly, the costume has now found its way to America and is up for auction at Profiles in History of Calabasas Hills, California as lot 1013. The missing head dome has been replaced, but not the internal electronics, and the costume is now being described as “the original screen-used Robot costume”. Although it does appear to be the same costume sold at Bonhams, in the photograph below, issued by Profiles in History, the stomach panel seems to be missing the dials seen in the above photograph issued by Bonhams.

Profiles of History will conduct an on-line auction on May 15, 2011, at 11:00 (UTC -8: PST) with an opening bid of $15,000 (£9,170). The full catalogue description reads:
“Original screen-used Robot costume from the Bela Lugosi film My Son the Vampire. (1952, Fernwood Productions)  In the time-honored British tradition of crusty, comic spinsters played by men in drag, Arthur Lucan of the long-running “Mother Riley” series falls under great peril from Bela Lugosi’s kidnap plot, sending this full-size walking (with a man inside, that is) and blinking (if one chooses to connect up the wiring again) Robot of metal, rubber, electronic components (most still present) and glass dome, which is the only replaced piece on this remarkable science-fiction artifact. Was later used in an episode of the BBC series, The Avengers.  Stands 84″ tall (to top of glass dome) and 30″ wide at shoulders. Missing internal components of the dome area, rest are more or less intact.”
The episode of The Avengers in which the robot appeared was “The See-Through Man,” which was filmed in November, 1966. The series was produced by ABC Television, not, as stated in the auction blurb, the BBC. The robot is said to have made appearances in other TV programmes. Please contact us if you have any information regarding other sightings of the robot. (Andi Brooks)

You can view the auction at
http://www.icollector.com/Original-screen-used-Robot-costume-from-the-Bela-Lugosi-film-My-Son-the-Vampire_i10499724

The robot as it appeared in Mother Riley Meets The Vampire 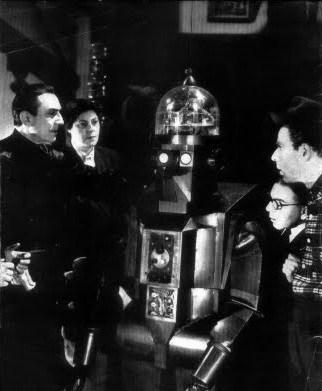 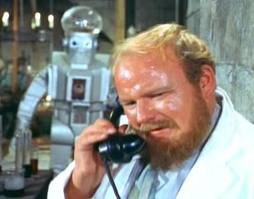 The robot costume in The Avengers episode The See-Through Man with Roy Kinnear.