Bryan Langley enjoyed a long and varied career. The son of the opera singer and actor Herbert Langley, he was born in Fulham, London, on December 29th, 1909. His first experience of the film industry was as an unpaid assistant during his school holidays with the H.B. Parkinson Company where his father was acting and singing in silent two-reel opera shorts. When he left school at 17 in 1927 his father arranged for him to join the company as a trainee. During his three years there he learned every discipline of the filmmaker’s art from negative cutting to lugging a tripod around the streets of London. Eventually  gravitating to camera work, his first photographic assignment was shooting street scenes for Norman Lee’s The Song of London in 1930. He moved to British International Pictures at Elstree Studios the same year, starting as assistant cameraman to cinematographer Jack Cox before becoming a director of photography himself. While at BIP he worked on many productions including Alfred Hitchcock’s Murder, Rich and Strange, The Skin Game, and Number Seventeen.

Herbert Langley as Valentine in Faust

By the time the Second World War broke out Bryan was working as a freelance cameraman in Amsterdam. He returned to England and in 1941 joined the Army Film Unit as an official cameraman, filming conflicts in West Africa, Europe and the Far East. He also trained the Indian Army’s Public Relations Film Unit.

After the war Bryan resumed his career at Welwyn Film Studios in 1946 before moving to Pinewood, where, as a special effects cameraman, his films included Piccadilly Incident, The Lavender Hill Mob, Reach for the Sky, A Town Like Alice and The Weaker Sex. In 1958 he joined the BBC Television Studio at Ealing and photographed drama serials such as Bleak House, Maigret and The History of Mr. Polly. Ever looking for new challenges and opportunities, Bryan began a new career in 1960 as an international film technician and cameraman for the United Nations Relief Work Agency. On his return to England he once again set up as a freelance cameraman, mainly for the BBC, where he worked on episodes of Doctor Who, and also for industrial documentary company Hugh Baddeley Productions.

Bryan setting up a shot on Kathleen Mavoureen (1937), which featured Old Mother Riley

I first contacted Bryan in June 1996 while researching Dark Eyes of London. Initially cautious, he asked me, “What do you want to know, and, importantly, why?” When I explained that I was working on a proposed biography of Bela Lugosi, he threw himself wholeheartedly into assisting me by answering my endless questions and delving into his personal archives. He was delighted to help because, as he said, “You are, in my view, what it’s all about. You are a fan and thus we in films are in your debt.”

Bryan’s answers to my questions, however, were often surprising. When I asked him about his memories of Bela Lugosi, he told me, “I’m afraid that I have no memories whatsoever of Bela Lugosi. To me, as a cameraman, he was just another actor who stood in front of my lens as and when the script prescribed.” He also told me, “I’ve never seen the film because I was a freelance cameraman pre war and on completion of Dark Eyes I went to Highbury Studios to shoot Mrs Pym of Scotland Yard and from there to Amsterdam to shoot De Spoek Trein (The Ghost Train) and was there until the invasion of Poland. Fortunately production was ending at the time so I scurried home just in time for the kick off of World War Two.”

Bryan was curious to see the film and asked to borrow my video of it. Surprisingly, he didn’t have a video player of his own, so he took the video to his daughter’s house. I waited eagerly to hear his verdict. When it came, it proved to be another surprise. He wrote,

“I watched Dark Eyes on Saturday and was utterly shattered by recalling nothing whatsoever of the film, other than the quick-sands sequence which was not much to write home about.

What upset me mostly was the horrible print and the diabolical dissolves. Nothing was much good other than the playing of the two parts by Bela Lugosi, and of these I preferred him in the ‘blind man’s’ role. (Greta Gynt was also good). 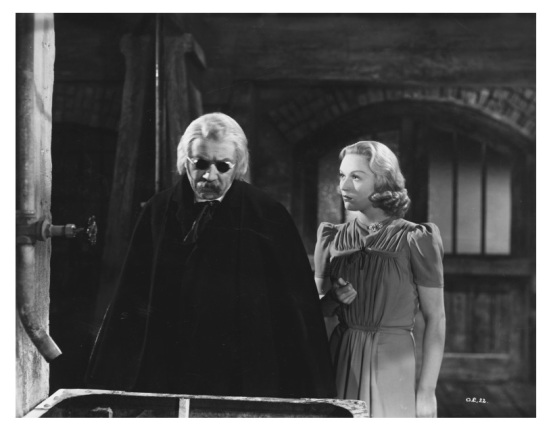 In reality, my shock at seeing Dark Eyes is a reflection of how far the film/television business has progressed over the past 57 years. I saw it ‘cold’, with no intimation that it was so awful and thus the shock. And to think that I was proud of what I did and wrote so in my diary.

We live and learn, I’ll not ‘flash-back’ to what I did more than 50 years ago, best to remain in happy illusion.”

Bryan’s shock was no doubt compounded by the shamefully poor quality of pre-recorded videos in Britain during the 1990s. Perhaps his reaction would have been different had he had the opportunity to watch a pristine print on the big screen.

The diary to which Bryan referred was one of his ‘photo-diaries’. Spread over five albums, they contain technical information on all the films he shot, production stills, letters, cuttings, and other memorabilia. At the beginning of Bryan’s career, H.B. Parkinson had emphasized the importance of keeping a record of all the films on which he worked, including the technical details. Bryan followed his advice and maintained a diary until 1960 when he joined the United Nations. Before his death, he donated his diaries to the British Film Institute.

His entry for Dark Eyes of London states that it was the 88th film he had worked on and the 44th he had lit. His assessment of the 18-day shoot was, “Very good for me – good make-up.”

After he retired, Bryan was urged by his daughter to write down his memories of his career. Although he said that he remembered very little of Dark Eyes of London, he did recall the amusing attempts of the crew to recreate quicksand and film the climactic scene of Bela Lugosi’s character drowning in it. Bryan wrote the following account before seeing Dark Eyes of London for the first time, and did not appear to recall that “the actor who falls into the quicksands” was Bela Lugosi.

“Another memory is of a film called Dark Eyes of London. It starred Bela Lugosi, a well known American actor, and was directed by Captain Walter Summers. It was shot at Welwyn Studios in the spring of 1939, the year the war started. Incidentally, this film has been preserved and was seen recently on television, but not by me. I have two production stills of Bela Lugosi. Other than those photos, all I can remember of the film is as follows…..I will try to describe the scene…..SCENE….“a man falls from the loading platform of a Thames side warehouse into a quicksand which is revealed only at low tide, the man is sucked under and lost from sight. His fall is the result of Murder!!”

In order to construct a quicksand they opened up the Studio Tank, its area some 10 by 12 feet and about 7 feet deep, it may have been larger. On the far side of the tank was built the warehouse wall and its projecting loading bay. The tank was loaded with cart load after cart load of farmyard muck in the belief that this puddled into the tank would form a quicksand. Set building and tank filling went on for several days whilst we were shooting on the other stage. The edges of the tank were smothered with sand and riverside debris, green marine growth, a few rib-like planks and a dead cat. It all looked very real.

Whilst the tank was being filled we heard stories of people slipping into the tank and having their shoes pulled off by the terrible suction of the quicksands. It was all rather sinister and scary; some wondered whether the stuntman doubling for the actor who falls into the quicksands, would survive the peril.

The stuntman finally braves the murky shallows of the studio tank

And so, on the day of shooting the quicksand scene, we waited for the stunt man to inspect the job. He thought it best if somebody else was lowered on a chain into the mire to test the suction, and so a double for the stunt man was obtained.

A chain was tied around his chest and he was lowered link by link into the tank and its quicksand. His feet, legs, hips and waist slid into the morass like a hot knife through butter, but he stopped descending when chest deep, the chain slackened whilst he looked around. 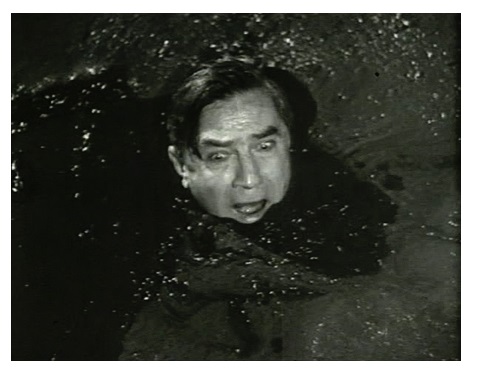 Bela Lugosi up to his neck in farmyard muck

Somebody surmised that an idiot had left a table in the tank. The stunt man’s double on the end of the chain was told to shuffle around and find the edge of the table with his feet. He never did find the edge, the mud and muck had sunk to the bottom of the tank to form a solid mass some four feet thick, leaving some three feet of muddy slimy water above.

Captain Summers, the director, was no doubt inwardly furious, but he had a schedule to complete and thus had to improvise. He told the stunt man, who by now was fearless, that when falling into the tank he must thresh around with his arms whilst gradually sinking down into the water, to take a deep breath and then go right under and all the time make motions as though corkscrewing down. That shot was made to the satisfaction of all. We used two cameras of course. 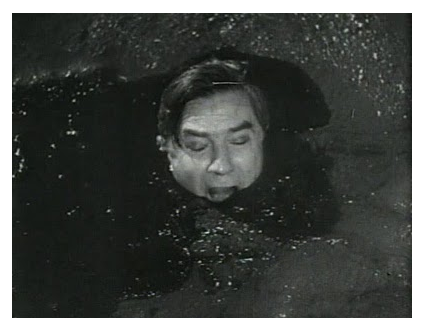 Bela Lugosi takes a deep breath before going under

Next was the close shot of the ‘real’ actor. He was inserted into the muddy water at the tank’s edge and told to repeat the action of the stuntman. Unfortunately, each time he submerged, his feet shot up out of the water. This in exactly the same way as happens in the Dead Sea where one cannot submerge without feet rising from the bottom. All the muck poured into the tank had produced a ‘Dead Sea’ effect. In the end, weights had to be tied to the actor’s ankles to enable him to submerge in close up. We learnt afterwards that a better way to simulate quicksands is to fill the tank with a mixture of sawdust and old engine oil. This remains fluid.”

Bryan died on January 31st, 2008, aged 99. Although he had been suffering from heart problems, he maintained a busy schedule of interviews right up to his death, which prevented the completion of three different sets of interviews scheduled for February.