Bela Lugosi died in his sleep at about 6:45 p.m. on Thursday, August 16th, 1956. He was 73. The cause of death was recorded as a coronary occlusion with myocardial fibrosis. His body was discovered by his fifth wife, Hope, in their apartment at 5620 Harold Way, Los Angeles, on her return from work. Although Lugosi felt that he had been forgotten in his later years, his death was deemed newsworthy enough for a photographer to rush to his apartment to snap a photograph of his body being wheeled away by the undertakers. 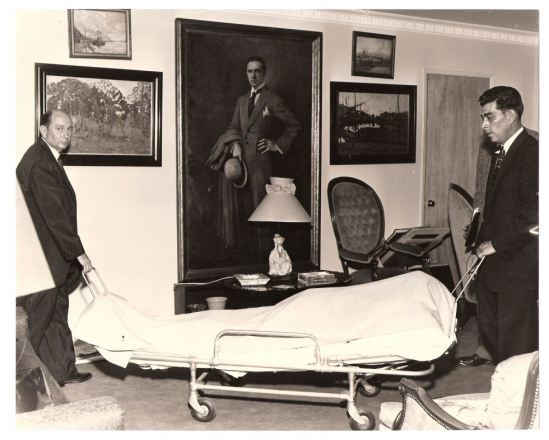 Hope told the press, “He was terrified of death. Towards the end he was very weary, but he was still afraid of death. Three nights before he died he was sitting on the edge of the bed. I asked him if he were still afraid to die. He told me that he was. I did my best to comfort him, but you might as well save your breath with people like that. They’re still going to be afraid of death.”

Bela Lugosi’s death generated few in-depth obituaries. Most notices were brief, with many focusing on his much publicized addiction to drugs, which came to light when he publicly committed himself to the Metropolitan State Hospital in Norwalk, California the previous April.

His funeral service was held at 2:30p.m. on Saturday August 18th at the Utter-McKinley Mortuary Chapel on Hollywood Boulevard in Los Angeles. Prior to the service, his body lay in state in full Dracula garb. Although Hope told the press that “it was his wish” to be buried in his famous Dracula costume, it was actually the decision of Lugosi’s fourth wife Lillian and their son Bela Jr.

Bela Lugosi photographed lying in state in the Strother Chapel of the Utter McKinley Mortuary by his teenage friend, David Katzman

In addition to Hope, Lillian and Bela Jr., those who attended the funeral service included Hungarian directors Zoltan Korda and Steve Sekely, Scotty Beale (assistant director on Dracula, Murders in the Rue Morgue and The Raven), Robert Boyle (associate art director on The Wolf Man), filmmaker Edward D. Wood Jr. and both his current wife Kathy and former wife Norma McCarty, Glen or Glenda producer George Weiss, Forest J. Ackerman (editor of Famous Monsters of Filmland), actors and actresses Carroll Borland (Mark of the Vampire), Tor Johnson and Paul Marco (Bride of the Monster and Plan 9 from Outer Space), Conrad Brooks and Dudley Manlove (Plan 9 from Outer Space), Loretta King (Bride of the Monster), and Don Marlowe, one of Lugosi’s former agents. Moments before the casket was taken from the Utter McKinley Mortuary, Marlowe pushed aside official pallbearer Richard Sheffield, one of Bela’s teenage friends, to ensure he was photographed by the waiting press.

Don Marlowe, back left, looks into the camera while the other pallbearers, including Edward D. Wood Jr., second right, concentrate on their footing 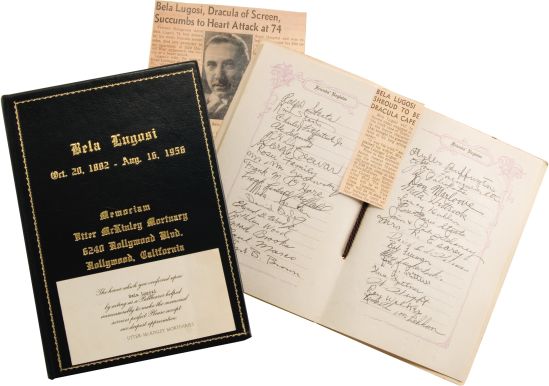 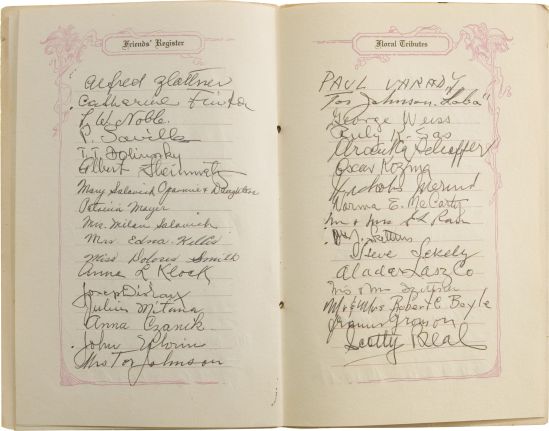 Contrary to popular myth, Lillian Lugosi, not Frank Sinatra, paid for the funeral, and the burial plot. Hope Lugosi paid for the casket. Bela Lugosi was buried at the Holy Cross Cemetery in Culver City, Los Angeles. (Andi Brooks)

Bela Lugosi’s final will, dated January 12, 1954, disproves the oft-repeated claim that he expressed a wish to be buried in his Dracula costume. 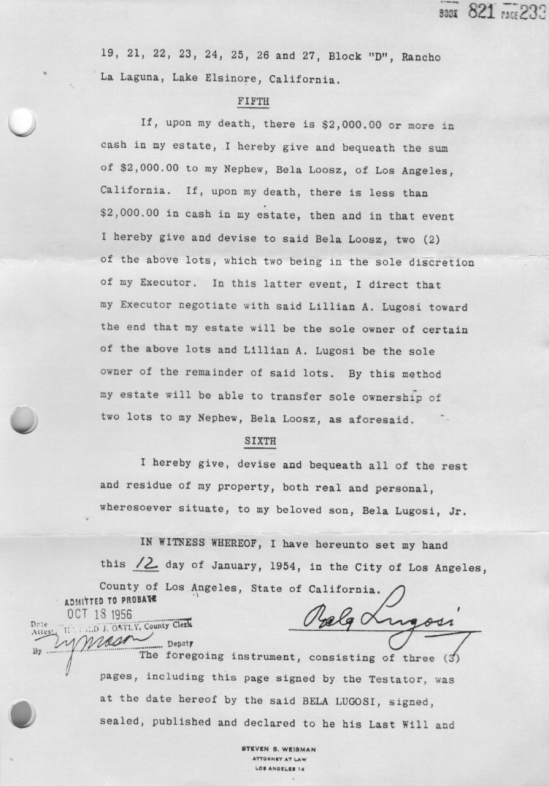 10 responses to “The Death Of Bela Lugosi”