Until filming of Son of Frankenstein began in November 1938, Bela Lugosi remained virtually unemployed through the year. His only child, Bela, Jr., was born January 5, 1938, and Bela, Sr. had almost no income. His known work is a radio appearance on the Baker’s Broadcast programme on March 13, on which he sang a duet with Boris Karloff, and personal appearances at the Regina-Wilshire Theatre in Los Angeles. Attempting to stave off bankruptcy, the small cinema was showing the first double billing of Dracula and Frankenstein, creating a nationwide and then international sensation, sparked the return of movie horror. His only “interviews” would be a quote in Jimmy Fidler’s column and in magazine piece on the appeal of horror (though no horror films had been made for over a year). During the horror drought, Fidler championed Lugosi a few times, bemoaning how Hollywood had discarded him. 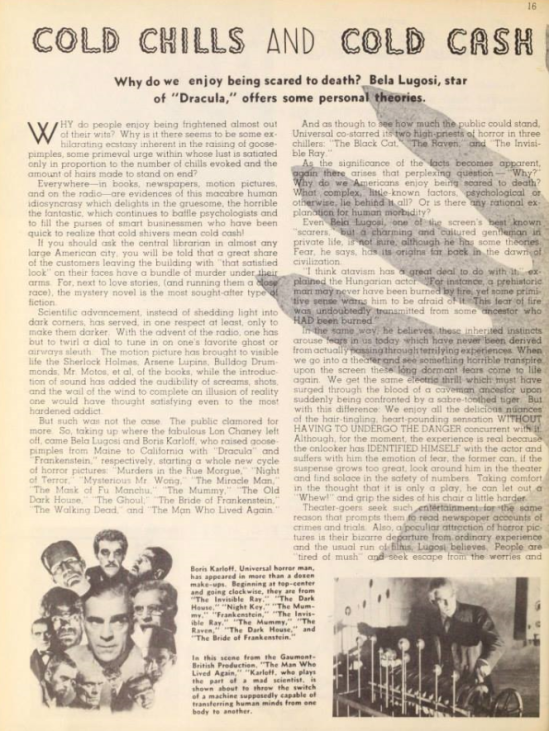 Why do we enjoy being scared to Death?

Why do people enjoy being frightened almost out of their wits? Why does there seem to be some exhilarating ecstasy inherent in the raising of goose pimples, some primeval urge within whose lust is satiated only in proportion to the number of chills evoked and amount hairs made to stand on end.

Everywhere—in books, newspapers, motion pictures, and on the radio-are evidences of this macabre human idiosyncrasy which delights in the gruesome, the horrible, the fantastic, which continues to baffle psychologists and to fill the purses of smart businessmen who have been quick to realize that cold shivers mean cold cash.

If you should ask the central librarian in almost any large American city, you will be told that a great share of the customers leave the building with “that satisfied look” on their faces have a bundle of murder under their arms. For next to love stories (and running them a close race), the mystery novel is the most sought-after type of fiction.

Scientific advancement of shedding light into dark corners, has served, in one respect at least, only to make them darker. With the advent of radio, one has but to twirl a dial to tune in one’s favorite ghost or airways sleuth. The motion picture has brought to visible life the Sherlock Holmes, Arsene Lupins, Bulldog Drummonds, Mr. Motos, et. al. of the books, while the introduction of sound has added the audibility of screams, shots, and the wail of the wind to complete the illusion of reality one would have though satisfying even to the most hardened addict.

But such was not the case. The public clamored for more. So, taking up where the fabulous Lon Chaney left off, came Bela Lugosi and Boris Karloff, who raised goose pimples from Maine to California with Dracula and Frankenstein respectively, starting a whole new cycle of horror pictures: Dr. Jekyll & Mr. Hyde, Murders in the Rue Morgue, The Old Dark House, The Mummy, Island of Lost Souls, The Invisible Man.

And, as though to see how much the public could stand, Universal co-starred its two high priests in three chillers (The Black Cat, The Raven and The Invisible Ray).

As the significance of the facts becomes apparent, again there arises that perplexing question—Why?” Why do we Americans enjoy being scared to death? What complex, little-known factors, psychological or otherwise, lie behind it all? Or is there any ration explanation for human morbidity?

Even Bela Lugosi, one of the screen’s best-known “scarers,” but a charming and cultured gentlemen in private life is not sure, although he has some theories. Fear, he says, has its origins far back in the dawn of civilization.

“I think atavism has a great deal to do with it,” explained the Hungarian actor. “For Instance, a prehistoric man may never have been burned by fire, yet some primitive sense warns him to be afraid of it. This fear of fire was undoubtedly transmitted from some previous ancestor who had been burned.”

In the same way, he believes, these inherited instincts arouse fears in us today which have never been derived from actually passing through terrifying experiences. When we go into a theater and see something horrible transpire upon the screen these long dormant fears come to life again. We get the same electric thrill which must have surged through the blood of a caveman ancestor upon suddenly being confronted by a sabre-toothed tiger. But with this difference: we all enjoy the delicious nuances of the hair tingling, heart pounding sensation without have to undergo the danger concurrent with it. Although, for the moment, the experience is real because the onlooker has identified himself with the actor and suffers with him the emotion of fear, the former can, if the suspense grows too great, look around him in the theater and find solace in the safety of numbers. Taking comfort in the thought that it is only a play, he can let out a “whew!” and grip the sides of his chair a little harder.

Theater-goers seek such entertainment for the same reasons that prompts them to read newspaper accounts of crimes and trials Also, a peculiar attraction of horror pictures is their bizarre departure from ordinary experiences and the usual run of films, Lugosi believes. People are “tired of mush” and seek escape from the worries and depressions of a dull, every-day world.

“It makes a great deal of difference,” a prominent psychologist says, “as to the way in which horror pictures are presented. Horror as it is shown on the screen and as it is told in news accounts is a far cry from the nastiness of reality, since, in both cases, gruesome details cannot be presented in entirety. The motion picture type of horror is made interesting, gripping, and dramatic. There is not the strict realism which in actual life makes crime loathsome and repelling.”

“It takes a thorough and special technique to play a horror role well,” says Lugosi.

“The more unbelievable the part the more seriously the actor himself, has to believe in it,” he explains. “The very moment he begins to play if from the outside, with his tongue in his cheek, he is lost.”

“The one quality required, above everything else, in a good horror picture is suspense,” he says. “And in every good picture there is a moment or moments at which this suspense has been built up to the breaking point, where pure horror has been distilled to its purest essence and the thrill is most intense.”

The case of Bela Lugosi—to my way of thinking one of the finest actors who ever stepped before a camera—proves that a too successful publicity campaign can boomerang and seriously injure the man it was intended to help. In his native Hungary and in New York on the stage, Bela played a great diversity of roles. In Hollywood, he unfortunately made his first hit in a horror epic—Dracula. And the Filmville publicity brigade immediately out-did themselves in their efforts to convince the world that this quiet, book-loving Hungarian was a real-life vampire. I don’t know how the public reacted, but the producers themselves fell for it so completely that they ruled Lugosi for everything but horror roles. Today, chatting with him, I recalled a story about a mysterious dog that howled every night in the hills near his home. “That,” said Bela sadly, “was not a dog. It was a wolf and it’s been at my door ever since.”