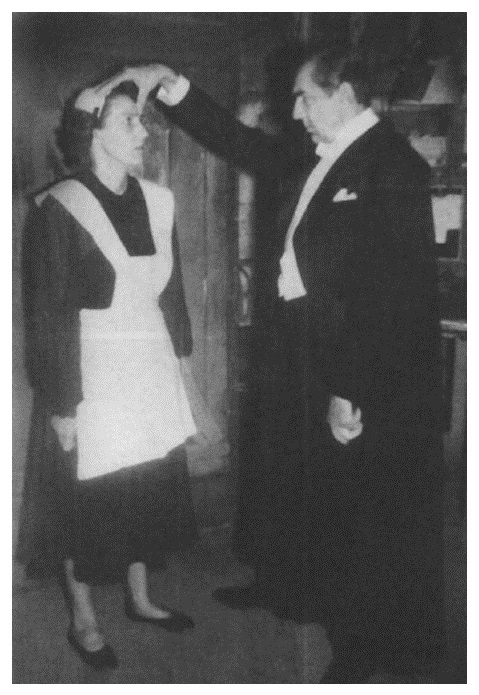 Lillian and Bela Lugosi at an unspecified performance

The current bill at this 5,000-seater moves at a neat clip. The curtain-raiser, the Four Strongs, rope spinners, showed plenty of dexterity and manipulation.

On in the No.2 spot was Hal Menkin and Madlyn. Menkin is a smooth tap hoofer who picks’em down cleverly. He did some tricky stair routines. Madlyn, a shapely blonde, around chiefly for decorative purposes, was okay for sight stuff.

Minda Lang offered a whistling routine and got a nice hand from the payers. The girl is attractive and sells to good results.

Edward Brothers (3) did some plain and fancy acro work and presented some amazing feats of tumbling and hand balancing. One of the boys had polio when a child and the theater brought in groups of polio victims as guests of Edwards. The promotion was intelligently handled.

Fastest act on the bill weas the Three Appletons, adagio act, consisting of Charles Appleton, his wife, Mitzie, and blond Virginia Tribbet. The hecticly paced act had the crowd on edge of seats and closed to a terrific mitt.

The hefty gal, Aunt Jemima, did songs in Sophie Tucker style, and garnered plenty chuckles with her dancing bits.

Undoubtedly one of the biggest laugh-getters on the show was Steve Evans. His take-off on a Polish drunk was excellent.

Closer was Bela Lugosi. He did a scene from Dracula with his wife playing the part of maid. It got a nice hand from the horror fans.