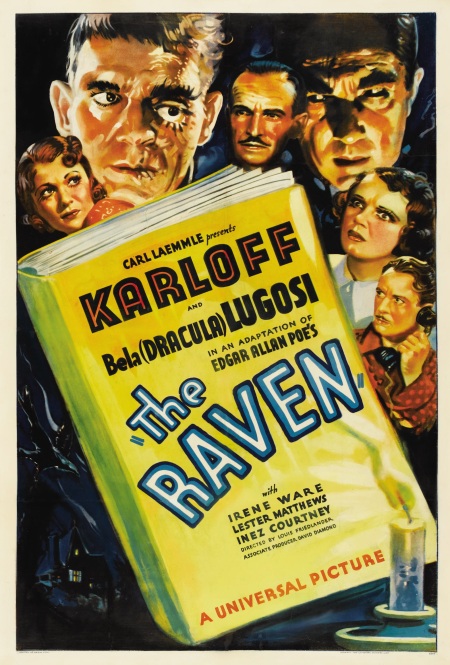 The Raven was Universal’s second star pairing of Boris Karloff and Bela Lugosi, although they had cameo roles in 1934’s Gift of Gab. The film reunited Lugosi with his Chandu the Magician (1932) co-star Irene Ware. Supposedly combining elements of Edgar Allan Poe’s The Raven, The Pit and the Pendulum and The Gold Bug, the finished film bore little resemblance to anything written by Poe. Bela Lugosi plays a doctor determined to possess a young female patient. He uses his obsession with Edgar Allan Poe and a criminal on the run (Karloff), who he has surgically disfigured to dispose of all who stand in the way of his goal. Although popular with audiences, the film added to an already growing moral backlash from religious and civic groups, the press and local authorities in the United Kingdom. The result was the introduction of a “horrific” category for films in the UK from January 1936, banning anyone under the age of 16 and causing a big loss of revenue for the Hollywood studios. This, coupled with the loss of control of Universal by the Laemmles in March 1936, resulted in a cessation of horror output in America, leaving an all but unemployed Lugosi facing financial ruin.

Here’s fair warning…Prepare your spines… ‘Dracula’ (Bela Lugosi) and ‘Frankenstein’ (Boris Karloff) are to be co-starred by Universal in The Black Cat, Edgar Allan Poe’s noted mystery…Can you imagine Dracula trying to outscare Frankenstein? Or vice versa? That will be just DUCKY! 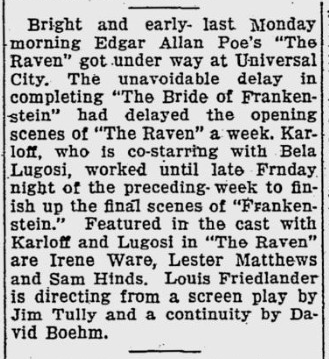 *
New York Times, July 5, 1935
The Screen
” The Raven,” With Boris Karloff and Bela Lugosi, Is a Horror Film in More Than One Sense.

But there will be no gentle rapping from this corner of the curious photoplay, “The Raven,” which Universal, with amazing effrontery, describes as having been inspired by two Edgar Allan Poe classics, “The Raven” and “The Pit and the Pendulum.”

A hybrid harder to describe than Boris Karloff’s newest make-up, the Roxy’s current tenant should have no difficulty in gaining the distinction of being the season’s worst horror film. Not even the presence of the screen’s Number One and Two Bogymen, Mr. Karloff and Bela (Dracula) Lugosi, can make the picture anything but a fatal mistake from beginning to end.

If you are as curious as we were to see how the movie makers would combine “The Raven” and “Pit and Pendulum”—using Karloff and Lugosi in the process—you may be interested to learn that what Poe suggested to the script boys was a story about a mad surgeon. The chap—Mr. Lugosi—had read Poe so thoroughly that he had gone whacky, kept a stuffed raven (no, Mr. Karloff does not play the raven) on his desk for luck and built a torture room in his cellar.

When the father of the young woman he would espouse refuses to give his blessing, the surgeon invites all the principals to a house party and then, cackling ghoulishly the while, tries out his torture machines. If it had not been for Mr. Karloff—this time with a dead eye, a slack mouth and few other cute touches—the death rate would have been terrific.

Of course, it must be said that Lugosi and Karloff try hard, even though, both being cultured men, they must have suffered at the indignity being visited upon the helpless Edgar Allan. But if “The Raven” is the best that Universal can do with one of the greatest horror story writers of all time, then it had better toss away the other two books in its library and stick to the pulpies for plot material.

BELA LUGOSI, who co-stars with Boris Karloff in “The Raven,” which opens Thursday at the Roxy, has arrived in New York and will attend the opening of his film before sailing for Europe at the end of this week. 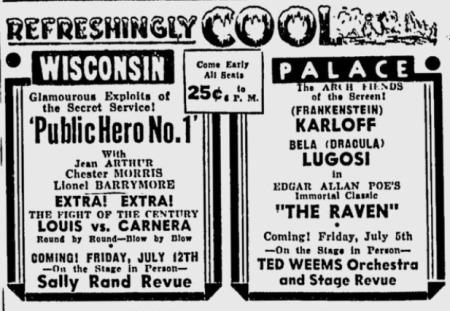 At the Universal trade show of “The Raven” on Tuesday evening at the Prince Edward, Bela Lugosi, a starred player, made a personal appearance. Introduced on the stage, he spoke a few words of gratitude for his reception – which was certainly hearty – and expressed a hope that the picture that followed would be enjoyed and make money.

Universal trade show “Raven”, I showed face personal on Tuesday night at the player who won Prince Edward, Bella Lugosi, stars. Was generous indeed – it has been introduced on the stage, he is the hope that would be to talk a few words of appreciation for the reception of his, to make money image enjoyed then expressed.

FILM salesmen apart, one rarely sees persons with uncanny powers at trade shows, so Universal can claim something of an achievement in the personal appearance of Bela Lugosi at “The Raven” screening at the Prince Edward, Tuesday evening. Lugosi, of course, has made our blood curdle on frequent occasions in previous thrillers. A generous “hand” as he came on testified to his popularity with exhibitors, and he said his piece very nicely before withdrawing behind the tabs. 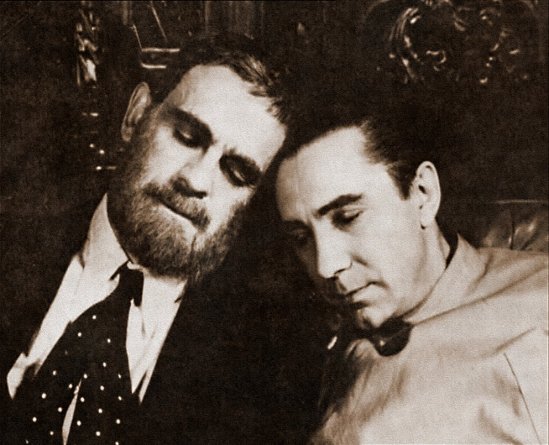 Our cameraman caught these two napping – Boris Karloff and Bela Lugosi, appearing together in “The Raven,” just completed at Universal. Lugosi recently arrived in England to star in “The Mystery of the Marie Celeste” for Hammer Productions. (Personally, we prefer our villains like this, they’re safe this way!) Also in the “Marie Celeste,” which is being made at Ealing, is the lovely Shirley Grey, one of the busiest actresses in Hollywood, who is paying her first visit to England. She is the only woman in the cast. 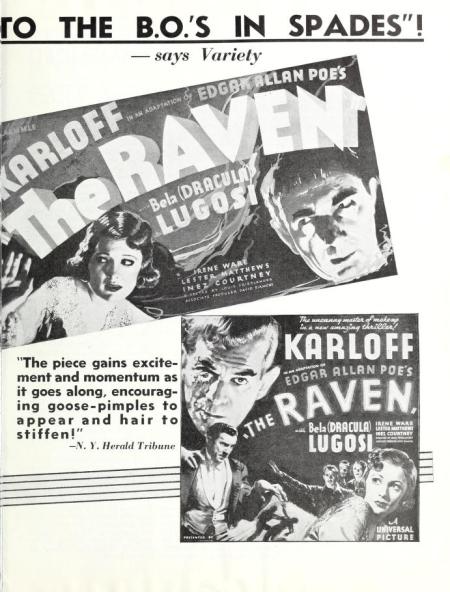 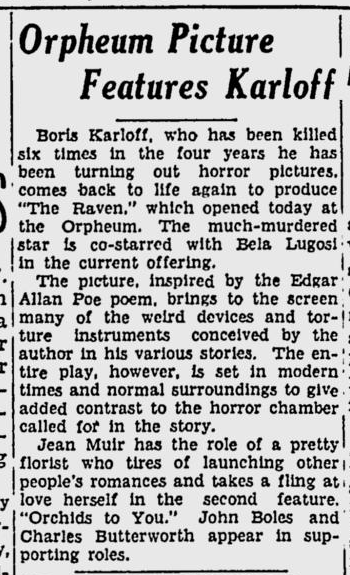 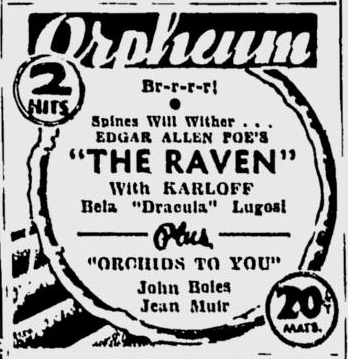 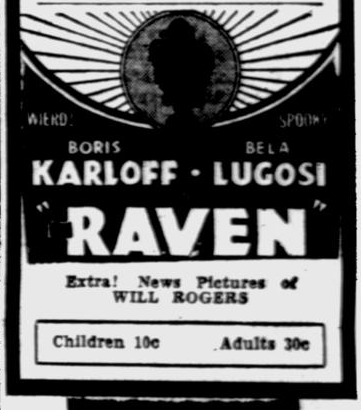 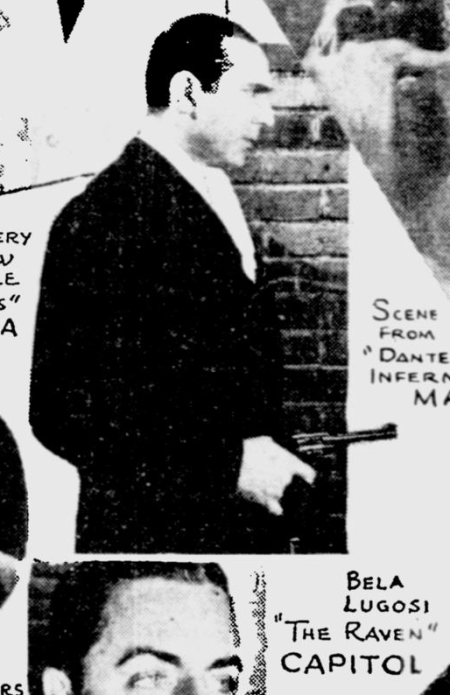 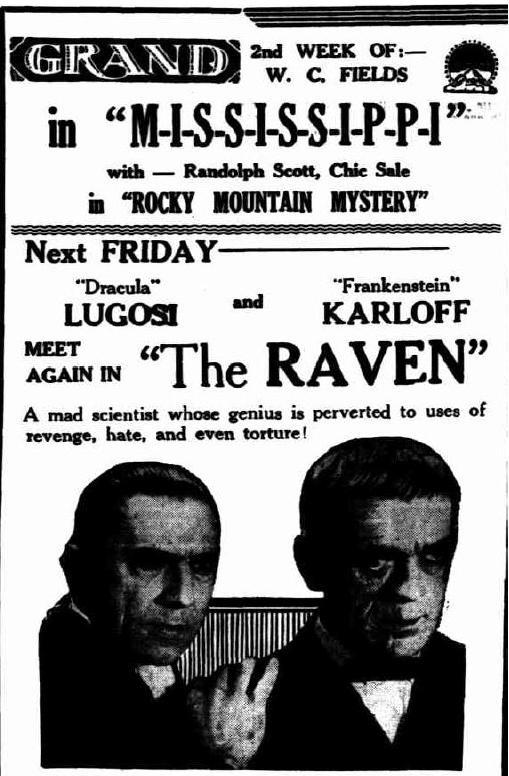 “The Raven” is a thriller if ever there was one. The tales of Edgar Allen Poe have been ransacked for their grimmest horrors. Both Boris (“Frankenstein”) Karloff and Bela (“Dracula”) Lugosi (as the posters describe them) have been engaged to play the leading roles. The film reaches its climax when.worried Judge Thatcher lies on a monolith, being subjected to the torture described by Poe in “The Pit and the Pendulum,” while, elsewhere, a loving couple occupy a room whose walls are slowly moving inwards. This room is described in another of Poe’s “Tales of Mystery and Imagination.” The raven’s duty is only to provide some of the atmospheric background of this grim story. Dr.Vollin (Bela Lugosi) is the fiend who fills his cellars with instruments of torture. Bateman (Boris Karlofl), a fleeing criminal, comes to the doctor with a demand that he operate on his face so as to make him un-recognisable by the police. Vollin plays a trick already made familiar in an earlier film; and when Bateman wakes from the anaesthetic he is a monster, with a twisted mouth and a wall-eye and a cheek stained with scars. But Bateman turns up trumps in the end. Even he, murderer and monster though he be, could not bear to sec Dr. Vollin inflict horrible tortures upon an entire house-party. This film may excite a few picture-goers, whose tastes are abnormal, but to ordinary, matter-of-fact people it will all seen some-what ridiculous. Poe’s strange imaginings refuse to be stated impressively in photographic terms. “The Raven” was producedby Universal, and it is being shown at the Capitol and King’s Cross Theatres.

Raven, The – Universal – Absurd melange tacked onto the name of Edgar Allan Poe’s great poem.Bela Lugosi, Boris Karloff supply plenty of horror, but cannot do much with this plot. 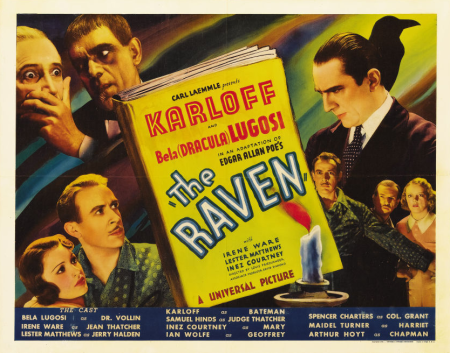 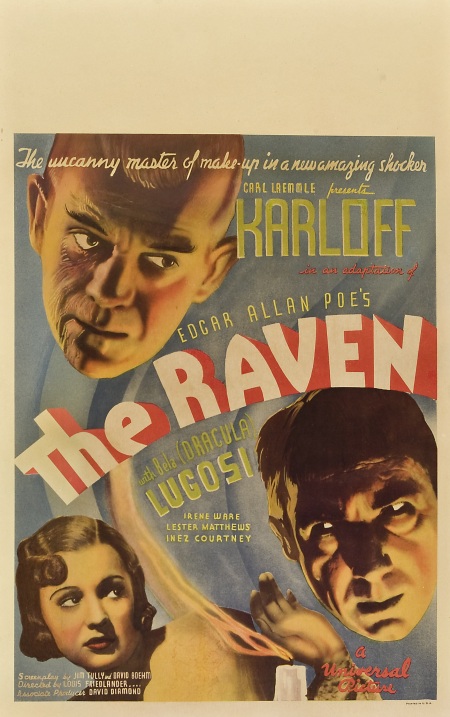 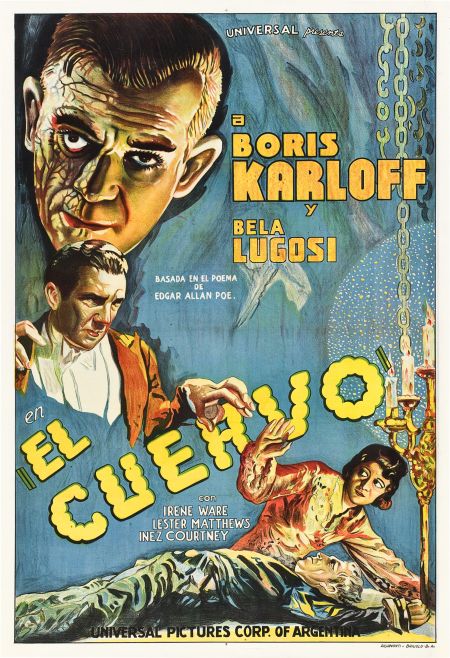 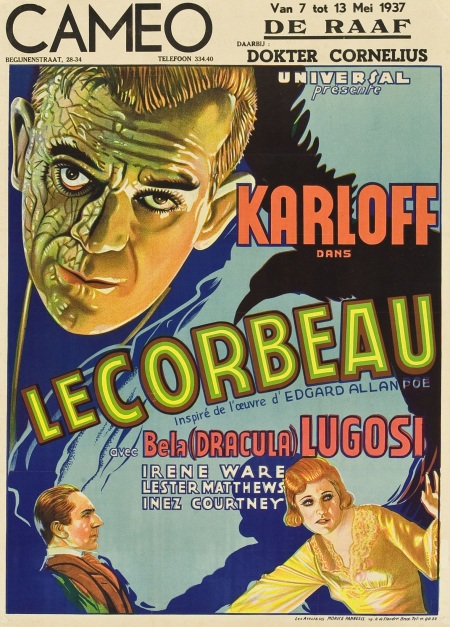 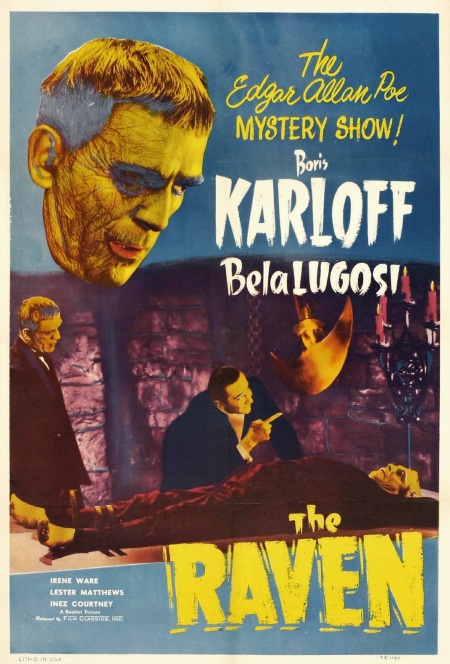 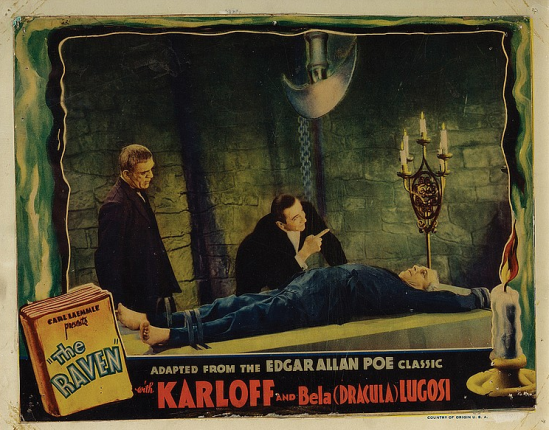 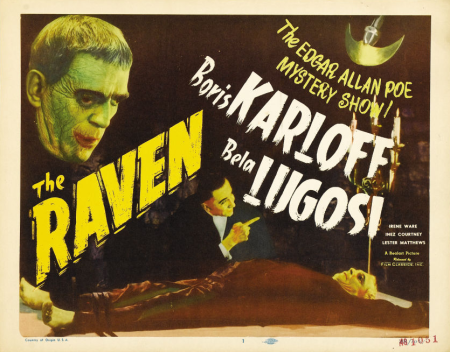 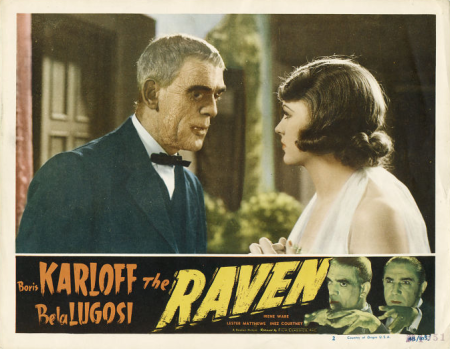 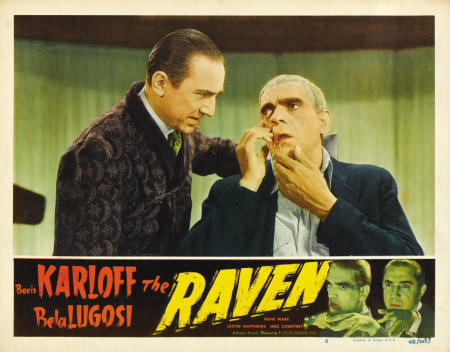 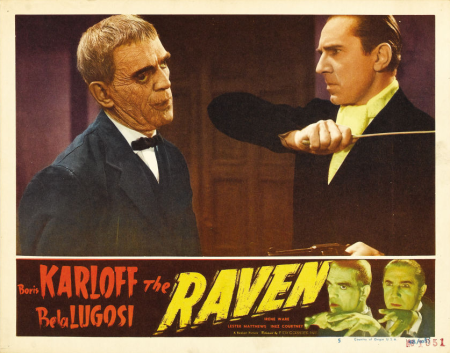 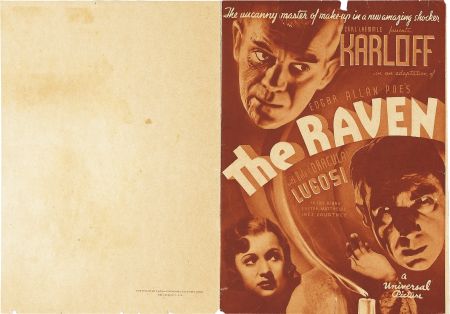 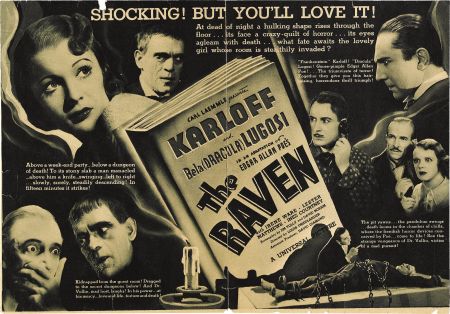 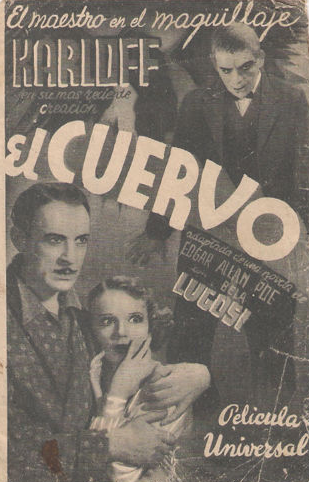 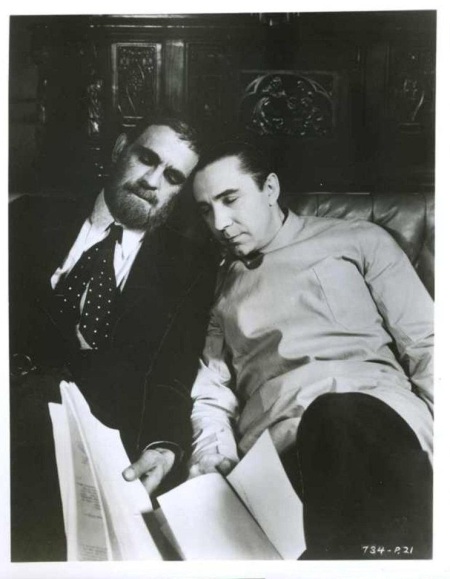 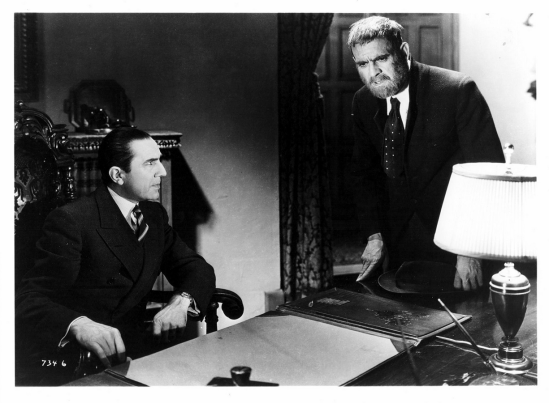 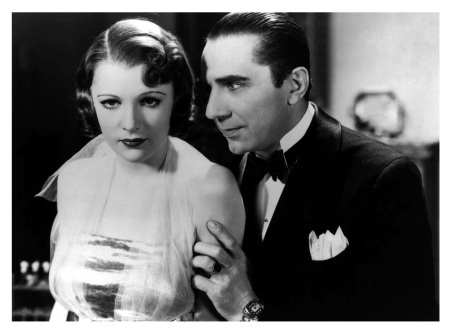 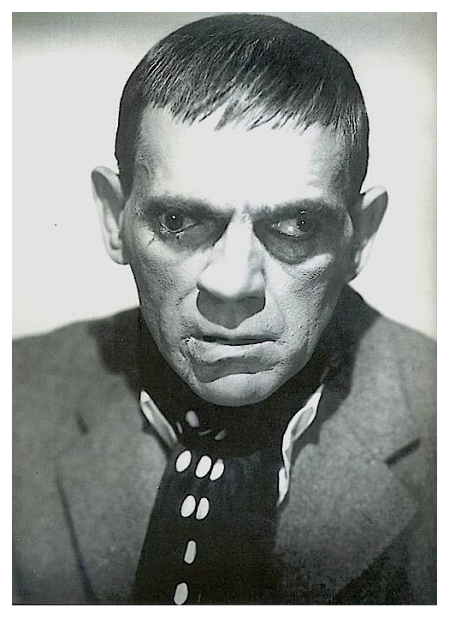 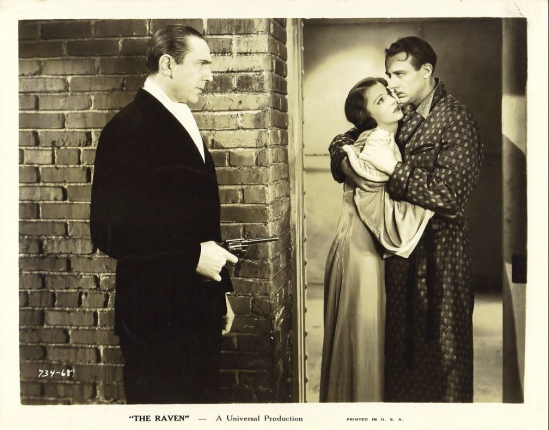