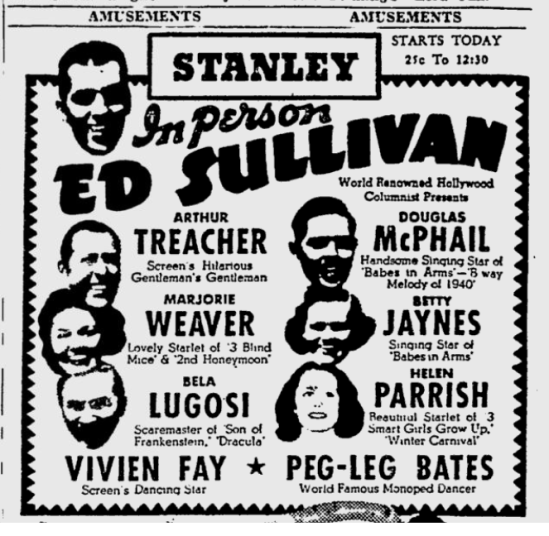 Broadway-wise Ed Sullivan knows that audiences want real entertainment in their stage shows, whether the performers be Hollywood “names” or Major Bowes amateurs; hence, it is not surprising that the well-known columnist rounded up some film folks who could do something besides photograph well for his traveling troupe.

The Sullivan company is at the Stanley this week to bring back the in-person shows and every member of the group takes an active part in providing a good program. Ed presides as master-of-ceremonies in professional fashion and has lots of fun with a film showing “Famous Firsts.” This bunch of clips from the “good old days” of the movies is packed with laughs, though many of the scenes originally were intended to be highly dramatic.

“Peg-Leg” Bates, the gay colored dancer, steals the show. Bates isn’t new to vaudeville patrons but his grand dancing is always a treat. Bates proves that even the loss of a leg can’t block the path to success for a fellow who is made of the right stuff. Added to his fancy stepping is some funny chatter and you’ll forget all about his handicap in your desire to applaud his talent.

Douglas McPhail and Betty Jaynes, well-known young singing stars of the movie lots help out with some good songs. The handsome Doug and the attractive Betty are Mr. and Mrs. in real life. Betty kept the tradition of show business yesterday when she insisted on taking part in the show despite a sprained ankle which was taped tightly and pained her much.

Arthur Treacher, than whom there is no finer “gentleman’s gentleman” in the films, gets a major part of the comedy lines. The gags are good and Arthur knows how to handle them. Bela Lugosi keeps his famous horror characterizations in a comedy vein and wins his share of the laughs.

Majorie Weaver, another of the starlets, has a magnetic personality which projects out over the footlights and Shepherd Sullivan has supplied her with material which she handles capably. Miss Weaver should do all right as a comedienne on the screen. Helen Parrish, another lovely ingenue, takes part in the frolic while Vivian Fry looks after dancing duties in expert fashion.

With four gals as pretty as these who actually can do something, Doug McPhail to sing, Bela Lugosi to burlesque his hair-raising screen roles and Arthur Treacher to juggle gags in sure-fire fashion, Columnist Sullivan can’t miss. His show ranks “tops” among those presented by the various Hollywood scribbler-turned-vaudebillians who have stopped in town. 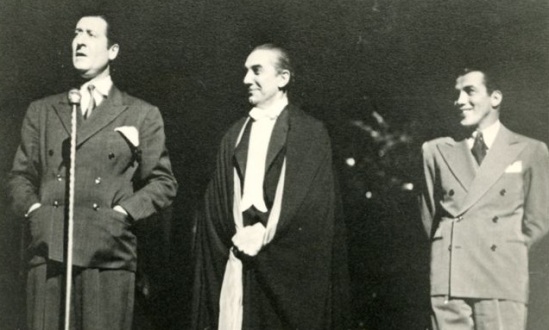 (My thanks to Gregg Pasterick for correctly identifying this photograph.) 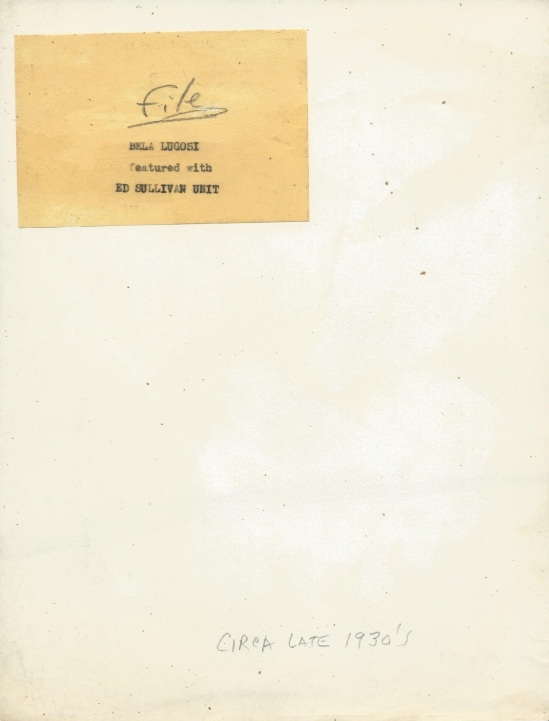 A letter Bela Lugosi sent to Jack Miller, arranging to meet at the State Theater on Sunday, April 21 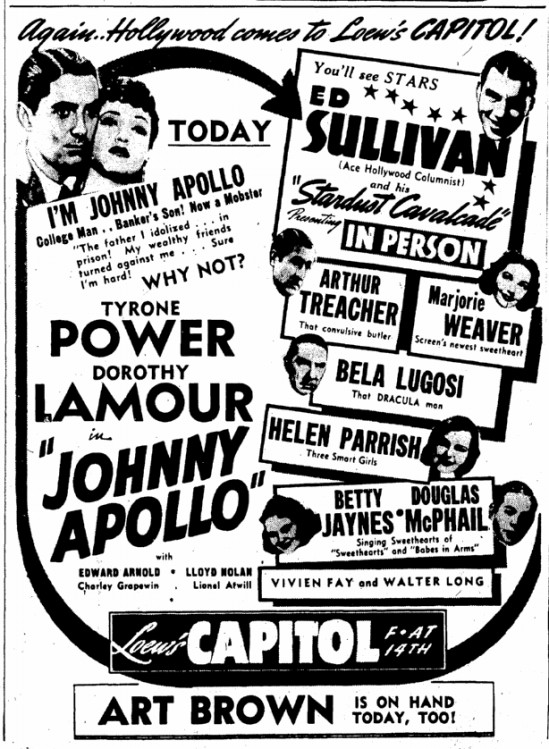 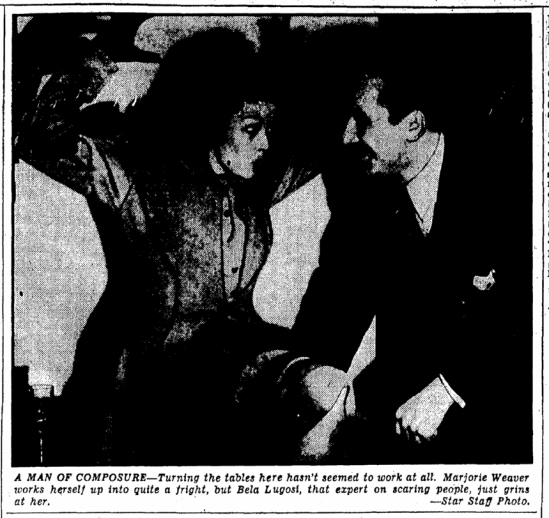 During the hour-long show’s run, Arkon’s Palace cinema screened Lugosi’s British film The Human Monster. Lugosi told reporters that he had performed at an Akron Hungarian club in the early 1920s.

Ed Sullivan told the local press, “This country, as you find on such a tour as this, is a kindly and generous audience, not at all malicious. If you are on the level with them, they’ll level with you. But they are quick to spot phonies and quacks. Essentially, the audiences of the country are rooting for those in the spotlight.”

Writing in the Beacon Journal on May 4, 1940, Edward E. Gloss, the newspaper’s theater,  described the production as “a pleasing and diverting hour.” He continued, “Ed Sullivan, a movie-town commentator, has assembled an attractive and entertaining company of Hollywood’s junior glamour girls, two of its senior character players and an old vaudeville favorite for this weekend’s stage attraction. With a long list of featured persons to display, the show moves at a lively pace with each contributing a specialty and bowing in the next attraction.”

Of Bela Lugosi, whose act involved wearing a Frankenstein mask while stalking a jittery Athur Treacher before revealing that he merely wanted Treacher’s autograph, Gloss wrote, “Bela Lugosi, the ‘Dracula’ horror peddler, dons his vampire cape and does a burlesque of the boogeyman he plays for the cameras. Arthur Treacher, English-accented player of comedy butlers, retains the broad drawl and indulges in a variety of comedy without once trying to ‘buttle,’ ”

While in Arkon, Ed Sullivan did some research on former Akron resident Clark Gable for his column in the archives of the Beacon Journal.

Youngstown was the final stop of the tour. Ed Sullivan wrote, “The managers of theaters, the stage crews, the electricians in the booth high up in the theater, the orchestras, the doormen all have made this an experience never to be forgotten. … It has been an exciting trip, physically and mentally exhausting, but tremendously stimulating.”