Universal’s third star teaming of Bela Lugosi and Boris Karloff, they also had cameos in 1934’s Gift of Gab, played up the scientific aspect rather than horror in the wake of a back lash against extreme Hollywood output, including both gangster and horror films. For once, Lugosi was cast in a non-villainous role as a good scientist pitted against Karloff’s  noble man of science driven insane by exposure to a radioactive substance brought to earth by a meteorite. During  pre-production the film had several proposed titles – The Shining Spectre, Ghoul of Piccadilly and The Death Ray.

John Colton has been assigned by Universal to adapt “The Invisible Ray,” by Howard Higgin and Douglas Hodge. The two principal roles will be assigned in all probability to Karloff and Bela Lugosi.

More than any other screen stars, Karloff and Bela Lugosi are so indelibly associated with certain characters that Karloof has been nicknamed “Frankenstein” and Lugosi “Dracula.” Both these players come to the State theatre on Thursday as co-stars in “The Invisible Ray,” thrilling drama of the man who drew power from the heavens in his world-shaking invention, “Radium X,” and wielded his power for good and for evil. Frances Drake and Frank Lawton support the stars. The Louis-Schmelling fight pictures round out the program.

Time marches on. When last we saw Mr. Karloff he was the tragic monster trapped in the tumbling masonry of Frankenstein’s mountain laboratory. Now, according to the Roxy’s “The Invisible Ray,” Karloff has restored the laboratory to its former state and, subleasing it from Frankenstein, has become a scientist on his own. More than that, he has discovered a new element—Radium X—which can blast a boulder at fifty paces or heal the lame, the halt and the blind at ten. As the story unreels, you realize that this is just another case of a man’s manager bringing him along too fast. It is no wonder Karloff’s mind cracks under the strain. Becoming poisoned with the new element and acquiring the deadly property of killing everything he touches, he decides to rid the earth of his wife, her lover, the woman whom he suspects fostered their romance and the two scientists who revealed Radium X to the world. Universal, which seems to have a monopoly on films of this sort, has made its newest penny dreadful with technical ingenuity and the pious hope of frightening the children out of a year’s growth. There is evidence, too, that Carl Laemmle wanted to say “boo” to maturer audiences. In a printed foreword is the legend, “That which you are now to see is a theory whispered in the cloisters of science. Tomorrow these theories may startle the universe as a fact.” Boo right back at you, Mr. Laemmle! THE INVISIBLE RAY, from a story by Howard Higgin and Douglas Hodges; screen play by John Calton; directed by Lambert Hillyer; a Universal production.  Dr. Janos Rukh . . . . . Karloff  Dr. Benet . . . . . Bela Lugosi  Diane Rukh . . . . . Frances Drake  Ronald Drake . . . . . Frank Lawton  Sir Francis Stevens . . . . . Walter Kingsford  Lady Arabella Stevens . . . . . Beulah Bondi Mother Rukh . . . . . Violet Kemble Cooper  Briggs . . . . . Nydia Westman  Headman . . . . . Danell Haines 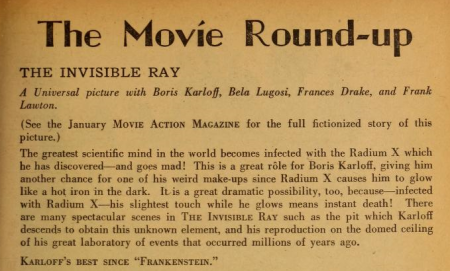 The Shiver and Shake Boys, Karloff and Bela Lugosi, combine their talents in this de-horrorized (by comparison with previous efforts) story of a scientist who discovers a new element astounding in its abilities to both heal and destroy. Poisoned by it so that his lightest touch is instant death, Karloff goes mad, eventually destroying himself. Lugosi is the hero this time. 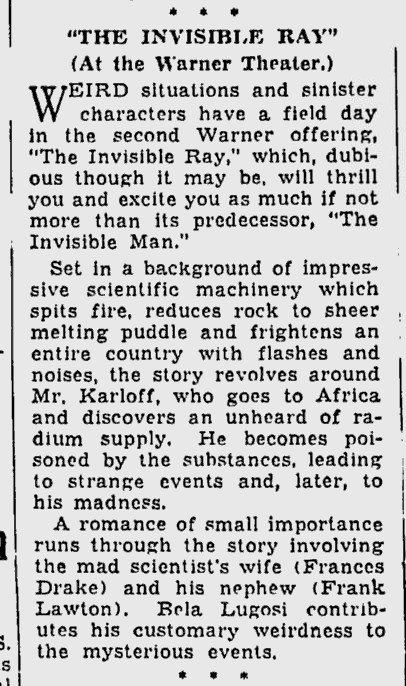 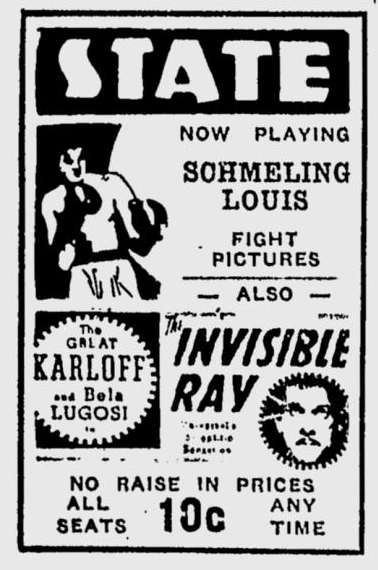 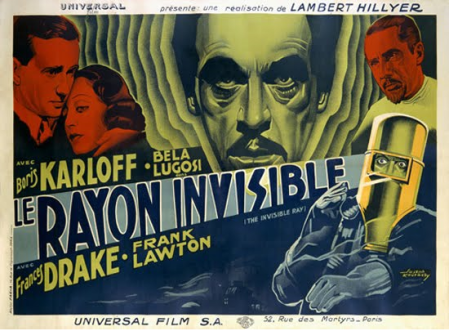 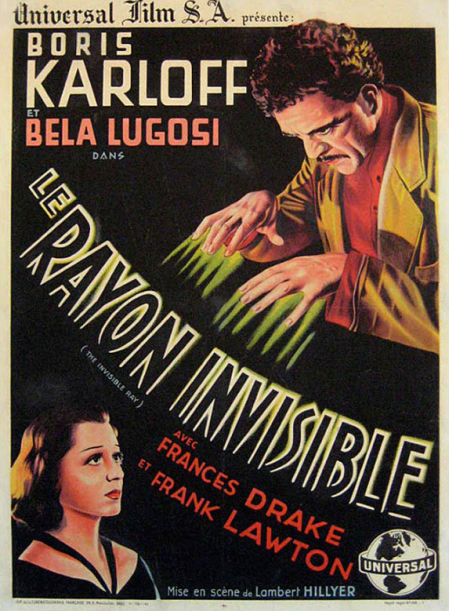 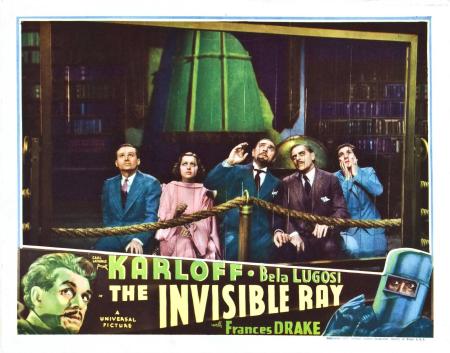 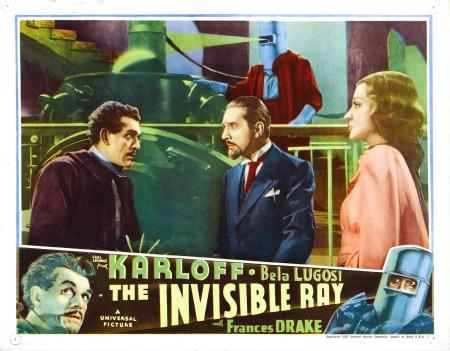 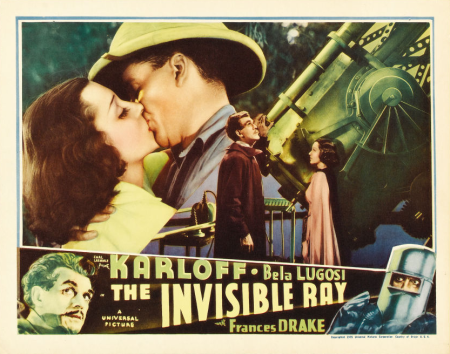 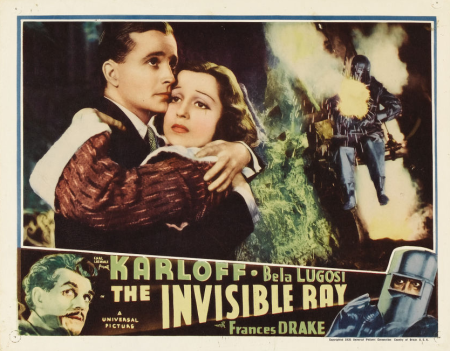 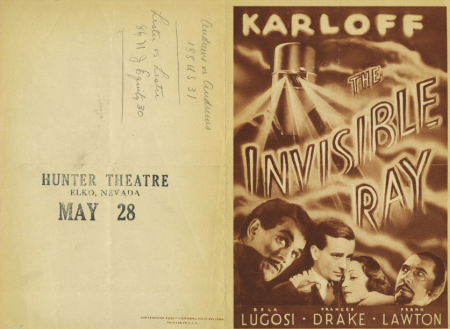 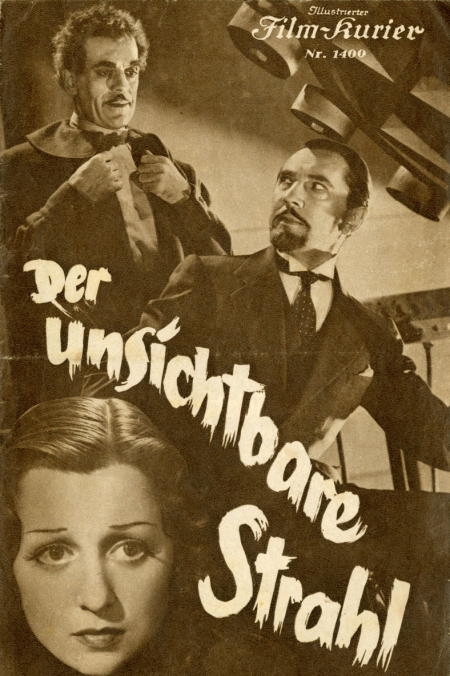 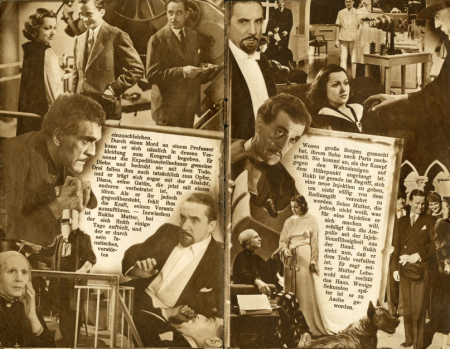 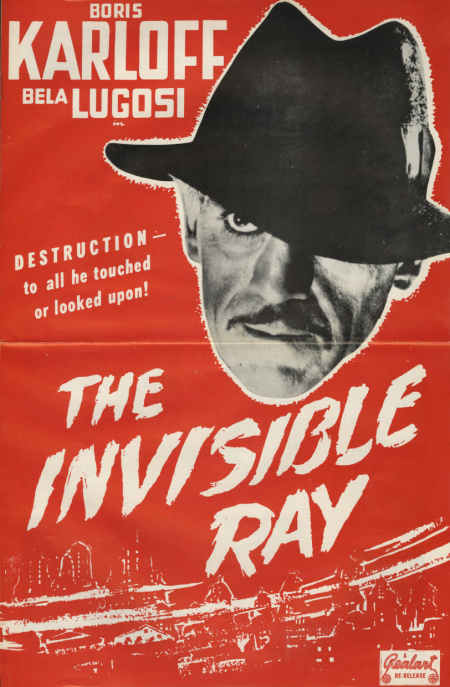 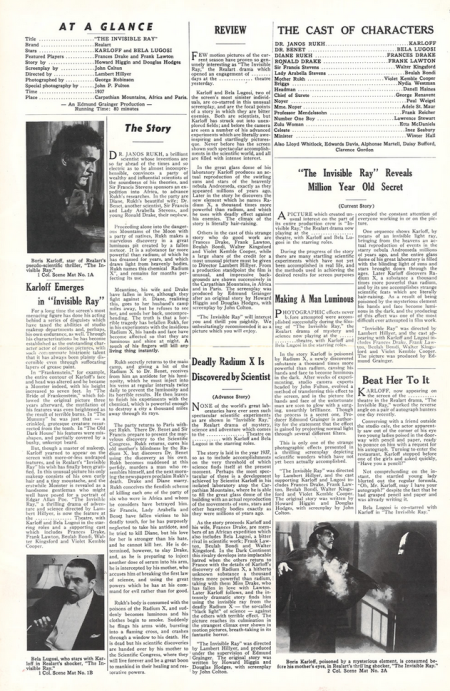 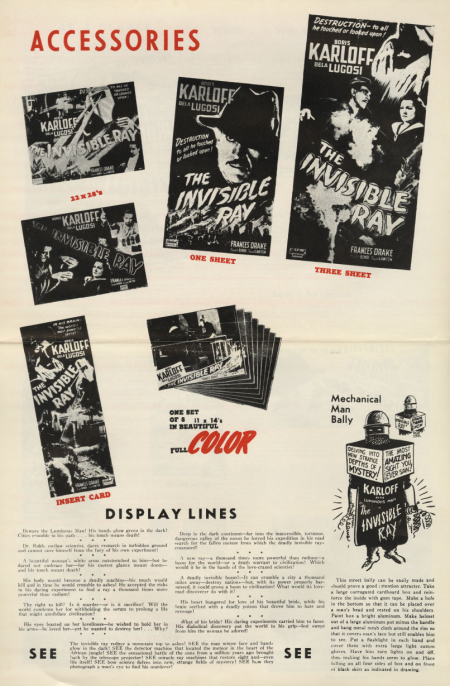 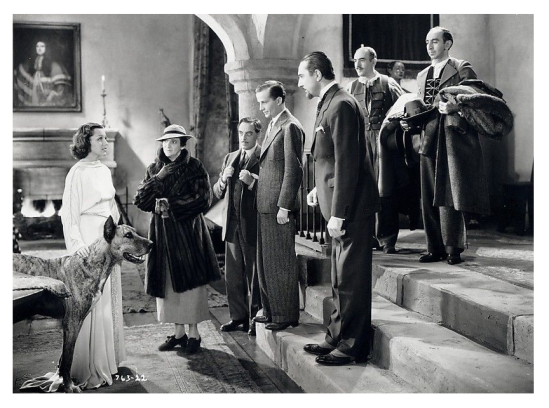 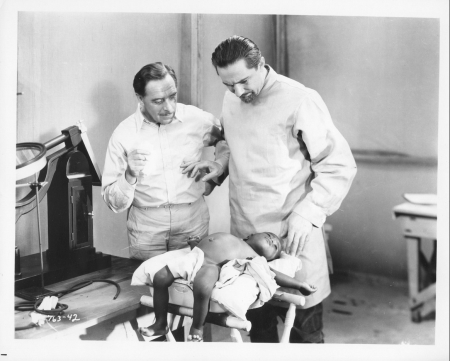 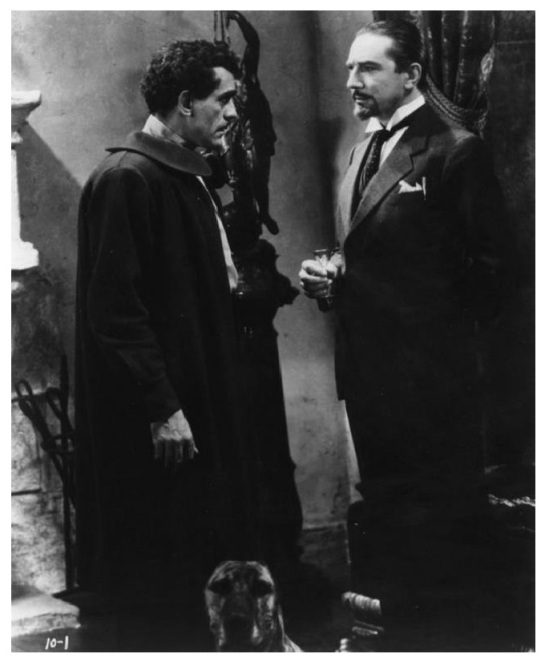 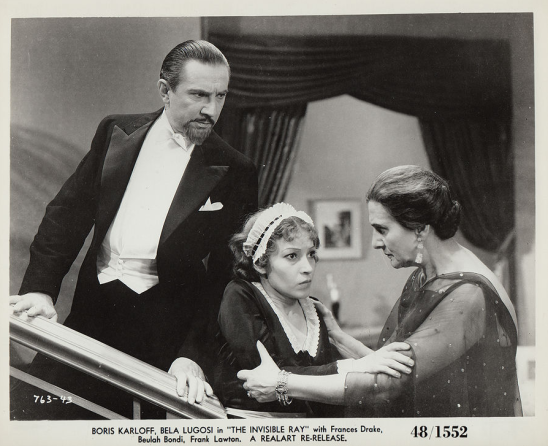