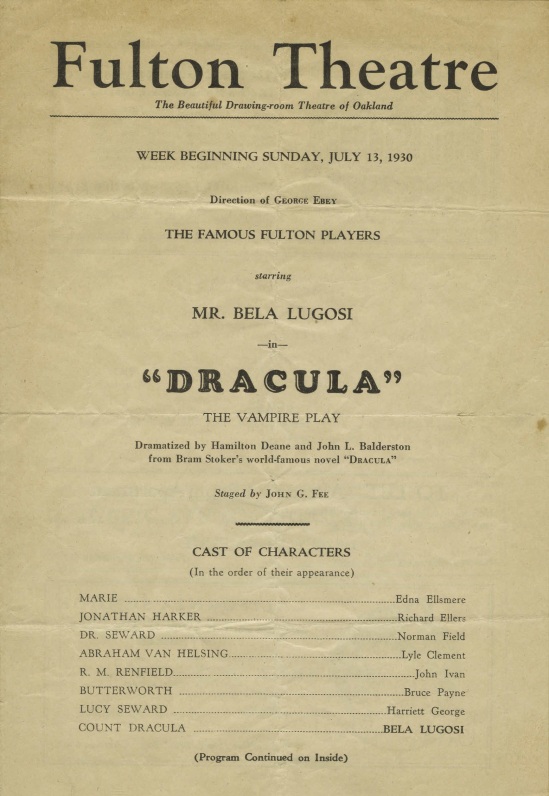 IN THE WORLD OF SCREEN & STAGE

Breakfast occupied a half hour, starting at 9:55 in the Ambassador coffee room whither I had been led by Bela Lugosi, who hungered for food as much as Count Dracula, whom he portrays again at the Fulton today, hungers for blood in the Bram Stoker thriller.

Lugosi had just arrive from Los Angeles where he has been spending his time in the talkies since his last engagement here as the touring star of Dracula. He had come in response to a summons from George Ebey, who felt that Oakland might like to while away the dog days with an honest chill or two.

“You’re a native of Hungary, is it not?” I asked in my best continental manner as Lugosi crunched up a pair of cereal biscuits in his hand as a start on the breakfast.

“It is so,” responded the genial Lugosi, who is only sinister when he dons the bat-cape of the vampire count

“Now, about your first name?” I pursued relentlessly, dropping a spoonful of marmalade on the table cloth, utterly destroying its pristine loveliness. “What is the English equivalent of your first name?”

“It might help.”  I admitted. “So far we’ve simply been taking on food. After all, I’m supposed to take back some burning message to my well known and rapidly shrinking public.”

“Bela,” he began sadly, “if translated into your English would be Adelbert.”

“Adelbert,” I repeated in a small voice, “Adelbert Lugosi. You never could play Dracula as Adelbert.”

“I suppose not,” agreed Lugosi, starting to destroy a large quantity of fresh figs. “However, they might call me Bert. I’ve been called worse.”

“You’d better leave it at Bela,” I suggested. “Bela is a mysterious sort of name and seems to fit the part.”

From that the conversation veered to the history of the play and Lugosi’s part in its American presentation.

He had the distinction of being selected from a group of 27 standard featured players in New York for the original Horace Liveright production. Since that time he has appeared as Count Dracula nearly 1,000 times with three leading women in his support.

“It is a peculiar role in many respects,” Lugosi explained. “When you see the play Dracula seems to be constantly on the stage. A casual glance would indicate that he speaks as many lines as Hamlet. Yet, as a matter of fact, the number of ‘sides’ is small. The professor really has a great many more.”

“But, if Count Dracula is not particularly chatty, he presents other difficulties. I find that it requires time and meditation to catch the mood of the character; each performance must be approached with some care. The result is that one doesn’t weary of the part.”

“I am looking forward to the screen production which is being planned by Universal. As you know, Dracula represents but a small portion of the story as outlined in the Bram Stoker novel. There is one scene in particular that cannot be presented on the stage but would be most effective on the screen.”

“I refer to that episode describing Dracula’s voyage by sea to England. He starts on a vessel containing a full complement of sailors. Each night the vampire, in order to retain his earthly form, must drink the blood of one human. Each morning there is a dead sailor. Finally the vessel comes within view of the coast of England. One sailor remains and Dracula takes his hideous toll.”

“As the vessel comes onto the rock bound coast Dracula is at the wheel of the charnel vessel but the countryside has been aroused. The Britons are awaiting him, prepared to drive the stake through his heart that will stop him from further walking on the earth. Dracula runs the ship on the rocks, wrecks it and turns himself into a wolf. As they shoot at him, he changes to a bat, flies away and escapes. It should make a most stirring picture.”