Filmed under the title Blood and Gold, The Rejected Woman is a convoluted story about two lovers (Nagel and Rubens) who overcome social prejudice and misunderstandings to cement their love. Released by the Goldwyn-Cosmopolitan Company in May 1924, the film enjoyed neither critical nor commercial success, despite the popularity of its two leads. 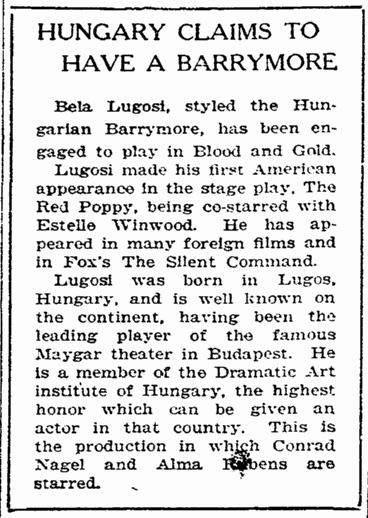 Fine story served with thrills. All about opera singer (Alma Rubens) who loses her voice and wins a husband.

Alma Rubens and Conrad Nagel appear together as stars for the first time in “The Rejected Woman,” which will be shown at the Strand again today, and the producers are to be congratulated on the superb performance of these favorites in John Lynch’s powerful drama of modern-day life. The theme gives both Miss Rubens and Mr. Nagel acting opportunities such as they have never had. The role also gives Miss Rubens a chance to wear marvelous clothes, an always welcome opportunity for an actress of such beauty. In featured roles are the ever-able Wyndham Standing and Leonora Hughes, internationally celebrated dancer and beauty, with a supporting cast of distinguished actors. Others in the cast are Bela Lugosi, known as the Hungarian Barrymore, Antonio D’Algy. George MacQuarrie, Madame La Violette, Fred Burton and Aubrey Smith. In support of these people there are a dozen New York society and stage celebrities, who appeared in the episodes depicting the gay home life of the hero. 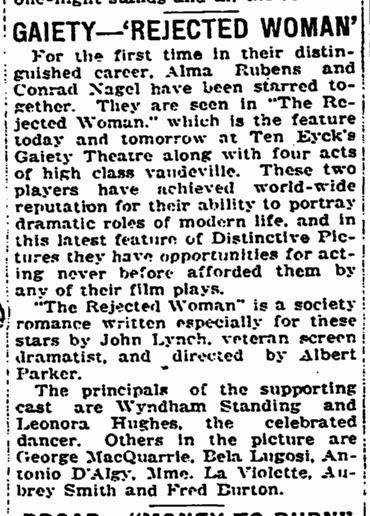