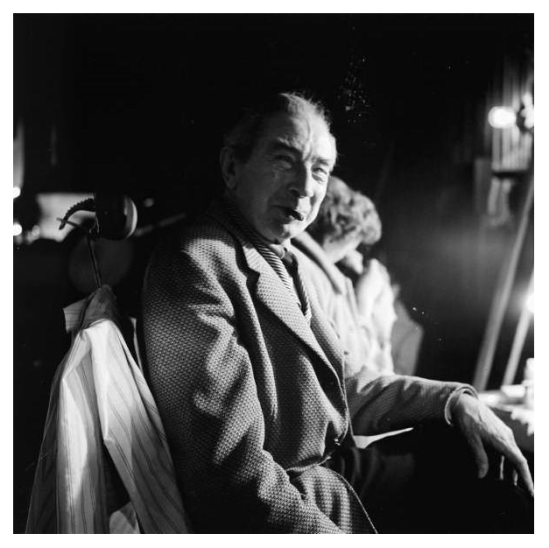 Drama Behind The Camera

Hollywood (UP) – Hollywood’s top bogey men are making a super-colossal horror film, but behind the cameras is a rea-life drama that’s more startling.

While the cameras rolled, a slender old man watching on the sidelines said softly, “I used to take five or six needles a day. And when I took the cure they took it all away from me. It was horrible, just horrible…”

Bela (Dracula) Lugosi is back in the movies for the first time since he confessed he was a narcotics addict and committed himself to a state hospital.

In the old days Lugosi was the star, the mad scientist who stirred bubbling concoctions. But on this set Basil Rathbone is playing the looney doctor. Lon Chaney, John Carradine and Akim Tamiroff also are in The Black Sleep, Lugosi plays Rathbone’s butler, a mute servant “who just lets people in and out.”

“There is Basil playing my part,” Lugosi said. “I used to be the big cheese. Now I’m playing just a dumb part. I have no dialogue because I was a bit worried whether I could do justice to the expectations. I’m still recuperating.”

On the gloomy set, Rathbone was reviving a man in the coffin. But I shivered more from the off-screen horror story Lugosi told me.

“I began using narcotics to kill the pain of sciatica,” he said. “Finally the doctor said I used so much I would die in six months if I didn’t stop.”

“I couldn’t afford the sanitarium. The only solution was to volunteer to enter the county hospital. There was no sense in trying to hide my problem.”

“The cure was very painful, terrible:

“I was able to get out in three months because of the kind letters from all over the world. I even got a telephone call from Japan. It was hell, to go through what I went through. I didn’t know I had so many friends—so many people who knew about me and gave a damn about my situation. They helped cure me.”

I asked Lugosi what he thought of the controversial film about addicts, The Man With The Golden Arm. The 73-year-old actor began to cry.

“The movie made it so easy for the dope victim to get out of it,” he wept. “The youth of our country did not get the impression of what a terrible thing it is. I have a son who is 18. He watched how I ruined my life.”

“Oh, if only the young people could see me, the result…”

On the movie set, old friends came up to shake Lugosi’s hand on his first day back at work. The cast presented him with a black leather bound script book.

“I was once nice to them. It all comes back to you,” the actor said.

HOW I BEAT THE CURSE OF DOPE ADDICTION

“Faith and work saved me”

as told to Lloyd Shearer

Hollywood – I am an actor and an ex-dope addict.

If you are 35 or older you probably remember seeing me in Dracula, Murders in the Rue Morgue or any of 50 horror films over the years. If you are younger you may know me by name or reputation.

I’m telling my story now in the hope that it will help young people learn about the tragedy of narcotic addiction. In a way, I’m qualified to do this. Recently as a patient in a state hospital trying to overcome the dope habit I watched many youngsters who were there – for the same purpose.

What makes a drug addict?

Now from my own experience, I am trying to tell youngsters that the answer to any problem lies in work and faith.

In my case the God-given help of my wife, a kind and wonderful young woman, also was important in helping me conquer the dope habit.

At 73, I’m starting over in motion pictures. I’ve just finished The Black Sleep, a horror film. Yes, I’m a new man. But it was a terrible struggle.

For 17 years, narcotics ruined my life. They turned my skin sallow, reduced me to a bag of bones. I was down to 100 pounds. My son, now 18, saw what horrible things narcotics did to me.

Every time I took a needle, I cursed myself. I told myself each was the last. A few hours later I was back on it again.

I began taking narcotics when I was a movie star. Top-flight. People catered to my every whim.

One day I suffered an attack of sciatica, one of those painful conditions that comes as you grow older.

“Lugosi, “ I should have said to myself, “you’re not a spring chicken any more. You have to expect these twinges and aches.” After all, I was 56.

I went to a doctor. “My pain is unbearable,” I exaggerated. “I must have immediate relief.” The doctor gave me a shot of demerol, a narcotic. The pain seemed to evaporate and I began to get an “edge,” a nice feeling of elation.

A few weeks later I began having trouble with my wife. I will not go into a recitation of my domestic troubles.

Perhaps it was psychosomatic. I don’t know. My wife asked for a divorce. The sciatica got worse. My agent told me that the studios were abandoning horror films. Again, the pains became intense.

Instead of trying to work out my problems reasonably, I turned to narcotics.

When one doctor refused to give me drugs, I saw another. When he, in turn, became wary I consulted a third physician. And so it went. Of course I could afford the narcotics.

When motion picture work grew scarce, I went on the road to make a series of freak appearances. You know: “Dracula in person…See the man who startled and scared you on stage and screen.”

On the road I found it a cinch to get narcotics. I would simply go to doctors in each city we played. The narcotics made me dull or pleasantly drowsy. Always I used them to escape from my world of unhappy reality. I just didn’t have strength enough to work myself out of my dilemma. I had been typed as “the horror” actor. Without movie parts I was reduced to “freak” status. I just couldn’t stand it.

When things were slow on the road I would wander back to Los Angeles. I was weak, depressed, all shriveled-up. I went to a doctor for a prescription.

“Not this time,” he said. “You’re an addict if ever I’ve seen one. Get yourself cured.”

I tried often—but no success.

Then one day a doctor did me a wonderful turn. “Look, Mr. Lugosi,” he said, “you either give this stuff up or…”

The doctor grabbed me by the shoulders. “You may die in six months,” he told me. “How long do you think your body can take this abuse? My advice is to commit yourself to the Los Angeles County Hospital.”

I decided that he was right. I went to the County Hospital. Doctors there took me off narcotics immediately.

I cannot describe the torture I underwent. My body grew hot, then cold. I tried to eat the bed sheets, my pajamas. My heart beat madly. Then it seemed to stop. Every joint in my body ached.

From County Hospital, I was sent to a state hospital. There, I decided to hold out, to beat the habit forever.

I was helped immeasurably by letters I received every day from a young woman who signed her letters simply, “Hope.”

She said she realized the hell I was going through. She confessed that father had been a narcotics addict and that she had watched him deteriorate.

She wrote so knowingly that my heart went out to her. Each day I waited for her letter of encouragement. It was the only thing that sustained me.

With the help of Hope’s letters I remained in the hospital until I was sure I could keep on living without drugs.

Last year when I left the hospital I checked Hope’s return address. I learned that her real name was Hope Lininger.

I called Hope, and asked her to visit me. “You are really responsible,” I told her, “for the fact that I think I have ‘kicked’ the habit.”

When she came to visit me, I was surprised. Here was a woman, only 36, fresh, attractive, an employee of a Hollywood studio.

It wasn’t very long before I fell very much in love with Hope. I told her that I needed her kindness, her strength, her care.

“If I did not think,” I said, “that you would turn me down, I would propose.”

Fearfully, I proposed, and Hope accepted. We were married last August 25.

A few days later I began a one-man crusade to induce young addicts to submit to treatment. I preach one message: Addiction is filled with misery and torture. Only through work and faith can you achieve lasting satisfaction and self-fulfillment in life.

They say that narcotics addicts never really overcome the habit, that sooner or later they succumb to temptation.

That’s not true. I am proof of the fact that it is not true. It has been more than a year since I had an injection of demerol. Not once since I left the hospital have I had that awful craving for narcotics.

Less than two years ago I struggled in a world of darkness, afraid of each new day. All that has changed. Now I get up every morning eager to meet the challenges of living.