Personal appearances at the Regina-Wilshire Theatre

On Thursday, August 5, 1938, the Regina-Wilshire Theatre at Wilshire and La Cienega in Los Angeles, trying to stave off bankruptcy, began what was intended as a four-day run  of a tripple-bill feature of Dracula, Frankenstein and Son of King Kong. The bill unexpectedly captured the public’s imagination and became an overnight sensation. It was soon playing 21 hours a day to packed houses while police controlled the crowds queuing around the block. At the same time, an unemployed Bela Lugosi, who, apart from one week’s work in the Republic serial S.O.S Coastguard in 1937, had not been offered film work for two years, was suffering dire financial problems. At the start of the year, he had been forced to apply to the Motion Picture Relief Fund for help with medical costs when his son, Bela George Lugosi, Jr., was born on January 5th, 1938. His only work during 1938 had been an appearance on the Baker’s Broadcast radio programme on March 13th, on which he sang a duet with Boris Karloff. As the crowds began to grow outside the Regina-Wilshire, he was forced to move into a rented house when the mortgage company foreclosed on his beloved mansion at 2227 Outpost Drive. Realising the goldmine he had stumbled upon, Emil Umann, manager of the Regina-Wilshire, quickly hired the unemployed actor to make nightly public appearances at the cinema. 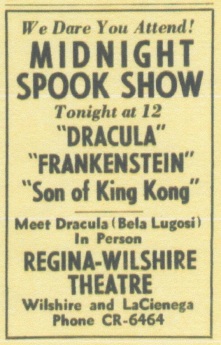