The first of only four films shot in colour to feature Bela Lugosi, King of Jazz comprises of a series of musical numbers alternating with brief comedy scenes. The film failed to live up to expectations at the American box office due to a public loss of interest in musical extravaganzas. Universal prepared at least nine different foreign language versions of King of Jazz, each with a different master of ceremonies. Bela Lugosi appeared as the emcee in the Hungarian version, which is currently unavailable. The large cast featured Carla Laemmle, billed as Beth Laemmle, the niece of Universal Studios founder Carl Laemmle. Carla feature in uncredited roles in The Phantom of the Opera (1925) and Dracula, in which she spoke the opening lines. In 2013 the Library of Congress selected King of Jazz for preservation in the United States National Film Registry as it was deemed as being “culturally, historically, or aesthetically significant.”

The G Sisters (Elinor and Karla)

The Radio City Rockettes (as The Russell Makert Girls)

The Sisters G (Eleanor and Karla Gutchrlein as The G Sisters) 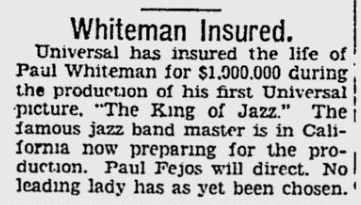 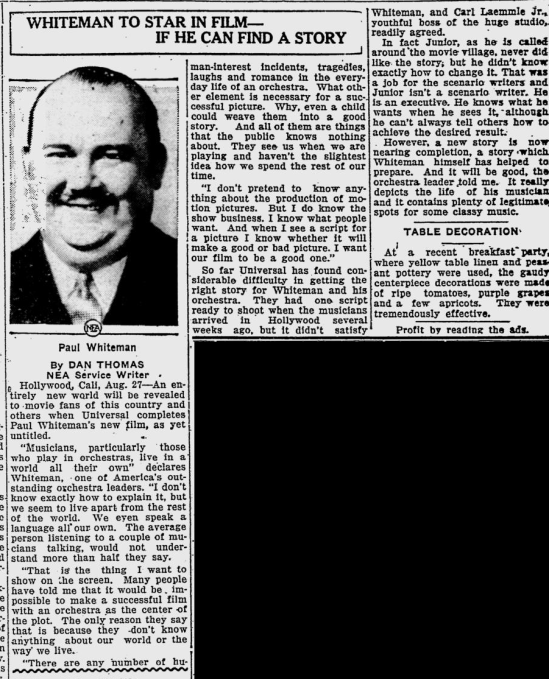 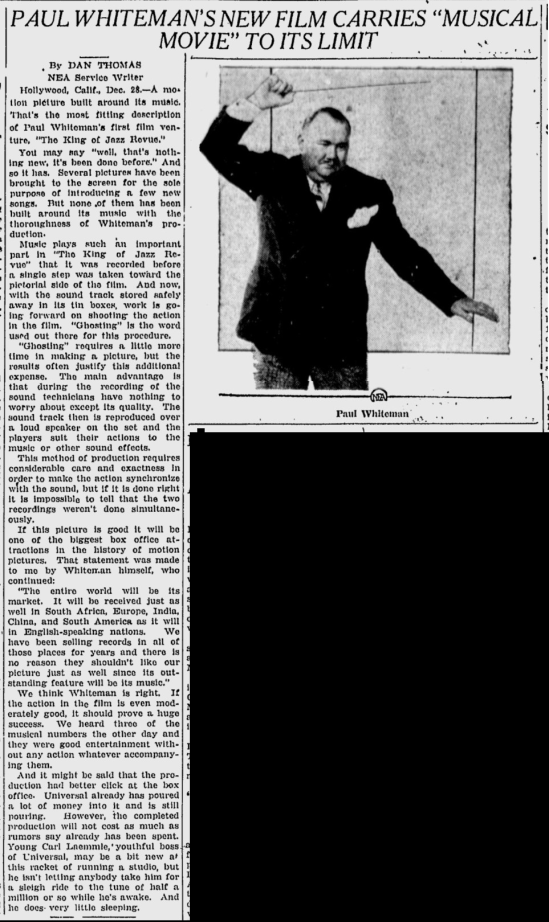 John Murray Anderson’s initial contribution to the audible screen, “King of Jazz,” with the rotund Paul Whiteman, reveals this director to be a magician of far greater powers than one imagined, even from his stage compositions. This Technicolor potpourri of songs, dancing and fun is a marvel of camera wizardry, joyous color schemes, charming costumes and seductive lighting effects. The only adverse criticism to be offered is that some of the sequences are a little somber, but even in these stretches Mr. Anderson’s highly artistic and imaginative mind is constantly apparent. It is one of the very few pictures in which there is no catering to the unsophisticated mentality, for all the widely different features are of a high order and yet one can readily presume that they will appeal to all types of audiences. This “King of Jazz,” referred to as an extravaganza, is something to be expected only from a director well versed in motion pictures, and the wonder that it should be Mr. Anderson’s first film impresses one with the value of stage training in making vocalized films. For even in photographic tricks it is apparent in this picture that Mr. Anderson has ruled the roost. Also there is nothing imitative, all the various turns being blessed with originality. Dance numbers on the screen have invariably been tedious, but in “King of Jazz” they are never on the screen too long, and while they are on exhibition they are thoroughly diverting. This sparkling piece of work has the audacity to commence with a remarkably clever cartoon series of jocose scenes telling how Mr. Whiteman was crowned king of jazz. No sooner is that over than a giant Whiteman appears on the screen, and he is asked by Charles Irwin, the master of ceremonies, as to the whereabouts of the jazz king’s band. Mr. Whiteman has a small box, and he informs Mr. Irwin that the forty musicians are in it. The tiny men are produced from the box and mount the elaborate stand, and soon they assume the same proportions as the image of Mr. Whiteman. Several of the musicians are introduced individually, and finally there is presented an opulent number called “The Bridal Veil,” during the course of which Jeanette Loff is heard rendering a pleasing song. The charm of this number, like many of the others, reveals that Mr. Anderson has visualized the full possibilities of the camera in connection with his flights of fancy. As each number vanishes from the screen there comes to view Whiteman’s huge scrapbook, another page of which is turned for the forthcoming feature. One of the witty interludes, as brief as some of Noel Coward’s scintillating shafts, shows Laura La Plante as a city editor of a sensational feminine newspaper. She wants alacrity from her staff. A girl reporter comes in and reports that a building in Forty-third Street has been burned to the ground. The city editor wants to know when it happened, and the reporter says: “Ten minutes ago.” Another reporter announces that a big bank has been robbed five minutes before. A third member of the staff dashes up to her chief, declaring: “Woman shoots her husband.” Miss La Plante requests to know when it happened, and the reporter, with a staying hand, says: “Wait, listen.” And then a pistol report is heard! John Boles, a far better John Boles than was seen in “Captain of the Guard,” sings something about a romance on the Rio Grande, and then there are dainty ballads from several girls. There is Jack White, who is described by Mr. Irwin as a “fellow of infinate jest, but just a little nutty.” White sings a dream about a fish fight. The Brox Sisters also render a melody in a skit called “Bench in the Park,” and then follows an amusing parody called “All Noisy on the Eastern Front.” An impressive conception of George Gershwin’s “Rhapsody in Blue” is set forth with much artistry. The primitive musical elements are registered by the rhythmic beating of a drum, and gradually this grows into the playing of jazz on the usual instruments. If anything, the “Melting Pot” number, the last of the series, is the most elaborate and impressive of all. William Kent, a comedian who appears in all the skits and does exceptionally able work, receives the opportunity at this latter stage of events to recite a comic bit about his intense affection for two goldfish. It is something that has to be seen to be appreciated and it aroused gusts of laughter yesterday afternoon. The climax to this beautiful and artistic series of scenes is the rendering of tunes and songs from many nations that are finally blended into a whole. There is no sequence that isn’t worth witnessing and no performance that is not capable in this fast-paced picture. Mr. Whiteman appears in person and conducts the orchestra. George Gershwin is also to be seen in the flesh, playing his “Rhapsody in Blue.” A Sparkling Extravaganza.  KING OF JAZZ, with Paul Whiteman, John Boles, Laura La Plante, Jeanette Loff, Glenn Tryon, Merna Kennedy, Kathryn Crawford, Stanley Smith, William Kent, Grace Hayes, Sisters G, the Brox Sisters, George Chiles, Jacques Cartier, Frank Leslie. Charles Irwin, the Russell Markert dancers and others, with songs and lyrics by George Gershwin, Mabel Wayne, Milton Ager and Jack Yellen, music score by Ferdie Grofe, directed by John Murray Anderson, produced by Universal Pictures Corporation. At the Roxy Theatre. 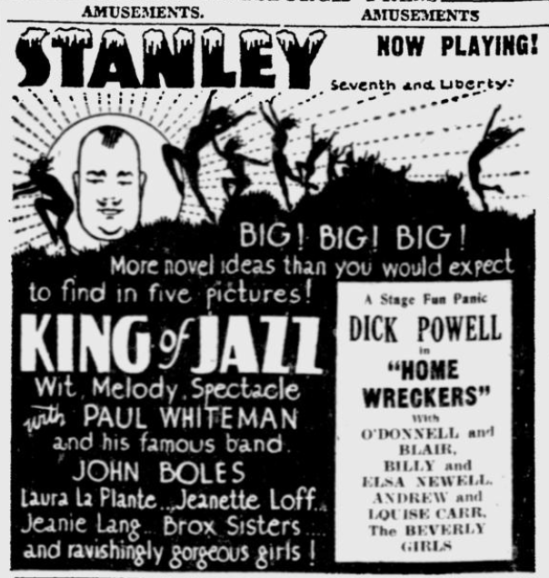 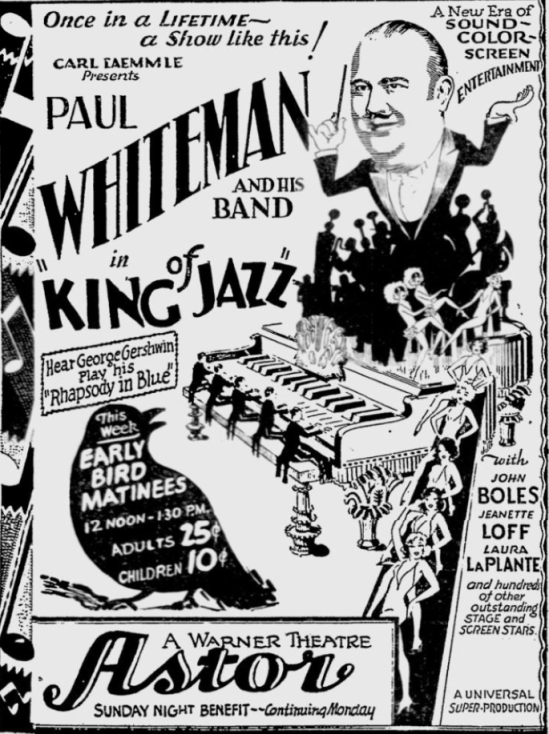 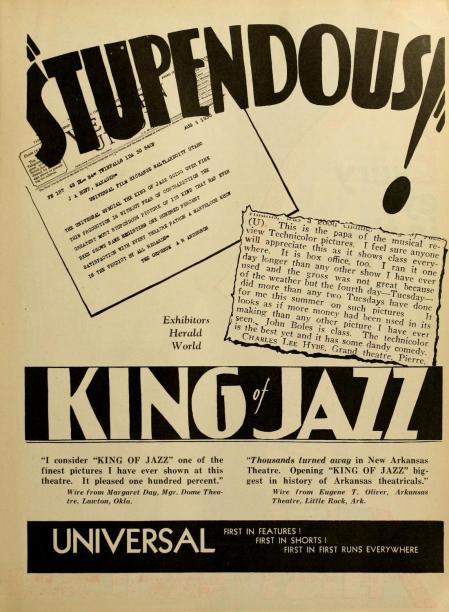 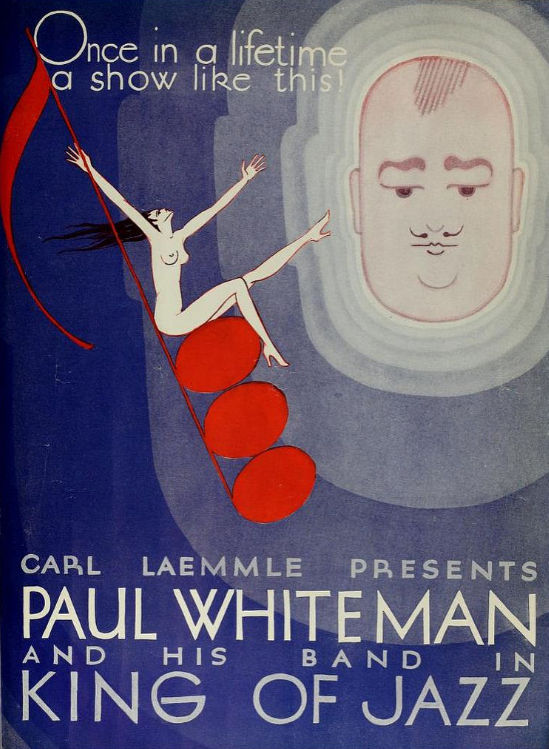 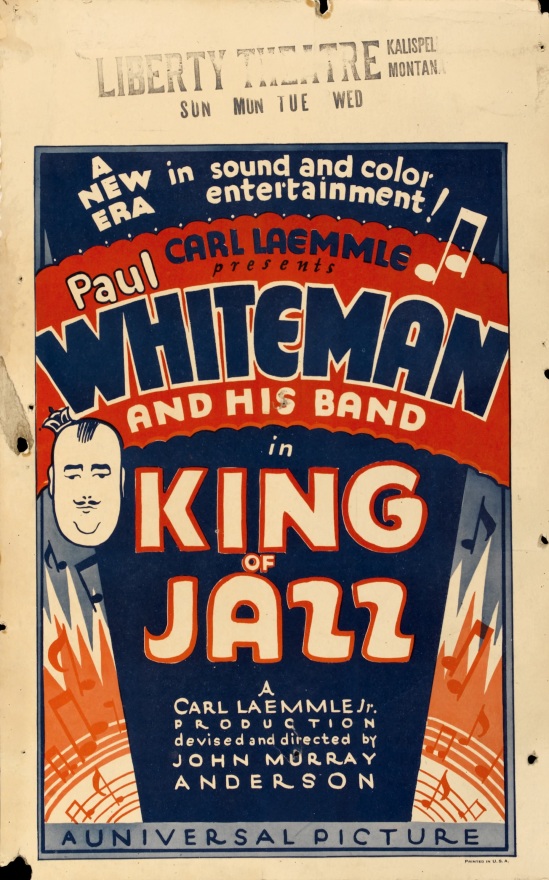 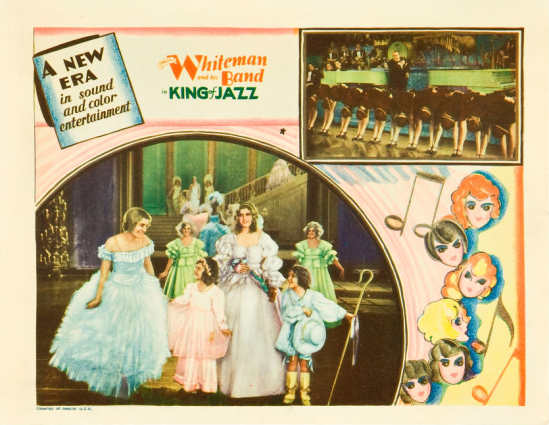 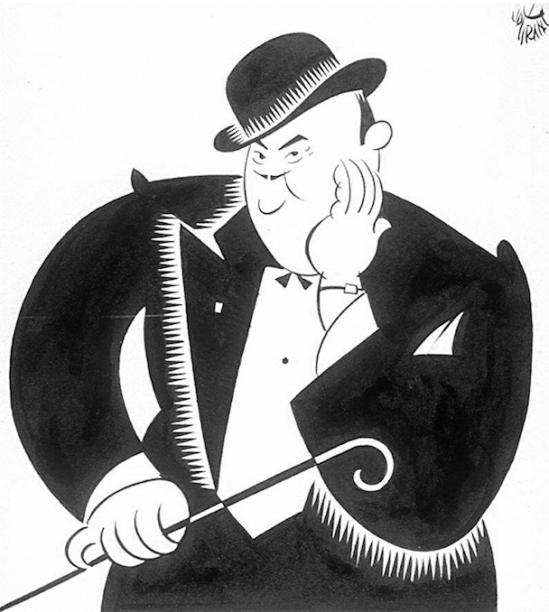