They’re not afraid of Bela Lugosi

GUYS AND DOLLS:  Let it never be said that Bela (Dracula) Lugosi, the screen’s boogey man, is No. 1 on the kiddies hate parade. Bela is right up there with Roy Rogers as an idol for the bubble gum set.      “It’s fantastic,” Bela grinned on the set of “Bela Lugosi Meets the Gorilla Man” in which he’s playing another mad scientist role-this time turning people into gorillas!     “You’d think the kids would be scared to death of me. But they’re not. Every time I meet one, it’s ‘Hey Bela, you’re the boogey man. Make some funny faces.’ Really, the kids love me.”     There only one cross Bela bears over his merchant of menace character which started 20 years ago when he stepped out of romantic roles and played Dracula. “Every time I get into a cab-and this is without exception-the driver looks at me and says, ‘Aren’t you Boris Karloff?”

Producer Touchy About Imitation Of His Stars

HOLLYWOOD – (INS) The comedy team of Sammy Petrillo and Duke Mitchell is so much like Dean Martin and Jerry Lewis that trouble may be a-brewing. Hal Wallis says he is waiting to see “Bela Lugosi Meets the Gorilla Man,” in which the boys do a turn. If they imitate Dean and Jerry, Hal will take legal action. Jack Broder, who has the boys under contract, says Sammy Petrillo can’t help looking like Jerry Lewis, and that Jerry once had him on a TV show as a gag. He says Mitchell is much shorter than Dean, but he has a good voice and may resemble the good looking Martin. “If we feel they are doing an imitation,” said Hal, “we’ll stop them.”

Hollywood, Aug. 21 – (UP) – As if one Dean Martin and Jerry Lewis wasn’t hectic enough around hgere, Hollywood now houses twos and Jerry Lewises, and the original team is so amazed they might sue. The latest “Martin and Lewis” are Duke Mitchell and Sammy Petrillo. They look, talk, laulike Dean and Jerry, and they’re in the movies now, too. Independent producer Jack Broder starred Mitchell and Petrillo in “Bela Lugosi Meets the Brooklin Gorilla.” Broder says Martin and Lewis asked to see the movie and the producer has a telegram saying the famed comics will go to courttheir young carbon copies continue to act. Mitchell and Petrillo, however, insist they don’t see “any resemblance.” “They’re the greatest comedy team in the business,” shrug. “We’re not trying to take anything away from them. We plan to continue in this business, and we think the public accept us on our own talent.” Mitchell and Petrillo have the same haircuts, expressions, gestures and even ancestries of Martin, who’s Italian and Leweis who’s Jewish. Mitchell, the singer, claims his hair “just happens to fall on my forehead – I can’t help it.” And Petrillo, the comic, saysutch haircut since he was eight years old, and was doing his act on a Phoenix, Ariz., radio station years before he first saw Lewis n a New York theater. Mitchell and Petrillo had single club acts before they teamed up here a year ago. Evein show business, they added, is a “combination of everybody else,” anyway. “Chaplin is the only originasl comic,” said Petrillo, and his arm like Lewis does. “If it wasn’t for Minosha Sku;nic (a Jewish comic) Harry Ritz and Gene Baylessis wouldn’t have an act. And that trick he does with his upper lip he got from Huntz Hall.” “I’m a combination of Billy Daniels, Billy Eckstine and Sarah Vaugn Mitchell. “Sometimes I get up to sing and I feel like Vaughn Monroe. Nothing’s original in show business. Who do you think Martin is? Crosby. Mel Torme’s like Sinatra, and he did all right.” Producer Broder says he hopes to star the boys in more pictures. “I don’t think they are any imitation of Martin and Lewis,” said Broder, and he looked me right in the eye, too.

This is not the wooly-type picture the unsuspecting customer might think. On the contrary, it poses as a “comedy,” using the very loose definition. It features a poor man’s Martin and Lewis. They don’t dance, they don’t sing, they aren’t funny – they just look stupid. 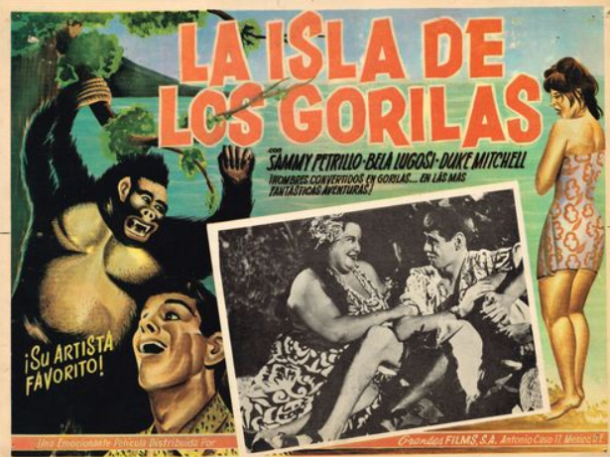 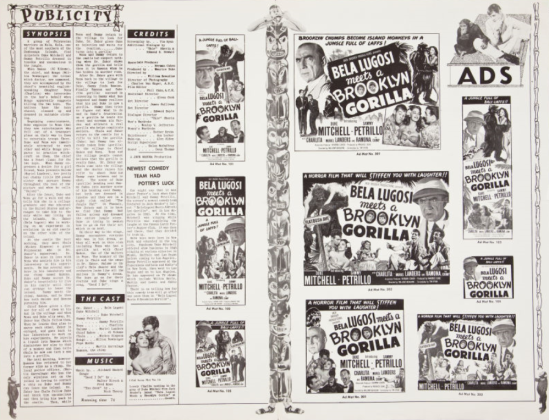