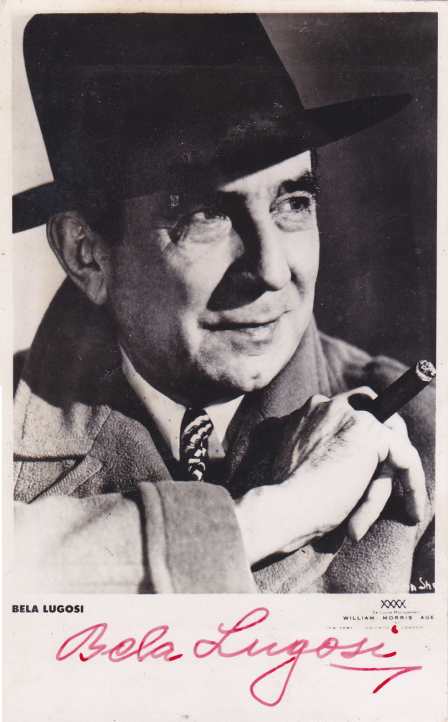 Having been a life-long fan of Bela Lugosi, I was delighted to hear that he would be visiting the Nottingham Theatre Royal in 1951. Two friends and I wrote to him earlier on in his tour, professed our undying devotion and admiration, begged him to provide a photograph and asked whether we might meet him during his Nottingham appearance. To our surprised delight, he replied, enclosing two photographs, signed in “blood”, naturally. One as Dracula and the other in civvies, wearing a black homburg hat, broad herring-bone overcoat and a scarf. Very sophisticated. I was initially disappointed when my friends claimed the ‘Dracula’ photo, but subsequently realised that my own photo was far more unusual. Included with the photos was a brief note indicating that he would be willing to meet us at the Theatre Royal.

In due course, we presented ourselves at the stage door, only to be told that Bela Lugosi had not arrived. The Theatre Royal stage entrance in those long-ago days was at the end of a long, rather steep alley, which was also the approach to the back stage area of the Empire Variety Theatre, now, sadly, long gone. It was a slightly chilly evening and there was a swirl of low-lying mist along the ground, which was not unusual in Nottingham in those days. Suddenly, from around the corner, emerged Bela Lugosi. I realise that I was an impressionable 18-year old at the time, but everything conspired to make his appearance truly electrifying. He was dressed entirely in black, his suit covered by a Victorian style cloak and the whole ensemble completed by a very broad brimmed hat. His clothes at this meeting were identical to those worn in his 1947 film “Scared To Death.” The mist swirled around his feet as he slowly made his way up the alley, leaning heavily upon an ebony cane. From that distance he was an impressive figure and as he came nearer we realised that he was much taller than we had realised – well over six feet. To add further to his rather unearthly appearance, his skin had the texture and colour of old parchment, due, no doubt, to the morphine which he had become addicted whilst using it medically to ease the pain in his afflicted leg. This gave him a pronounced limp and this, along with a stoop of the shoulders and the very lined face, made us realise far from a fearsome apparition he was, in fact, a sick and aging man. 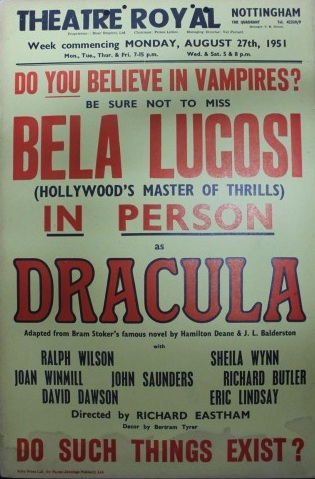 We stopped him as he approached us and introduced ourselves, tolittle effect, as he had obviously forgotten his note. This was produced to him, along with the photos, and the corners of his eyes wrinkled as he gave that peculiarly sinister smile of his. “We have waited a long while for the chance to meet you and now you are here,” I said rather lamely. This was the cue for the next shock of disillusionment – he was almost stone deaf! He cupped his hand to his ear. “What? What? You have travelled a long way over land and ocean to see me and now you are here,” he misinterpreted magnificently. “I know you are here, I can see you. From where have you travelled?” After much laborious explaining we finally got the message across. “So,” he said, “you see me! Now talk.”

By now, we had reached a high state of teenage angst, not knowing how to deal with the deafness of our hero nor with his totally overwhelming presence. We stammered out a few questions: “Was he travelling alone?” No, he was accompanied by his nurse (Actually his wife) who looked after him on a general basis and treated his legs. “Did he have any regrets or unfulfilled ambitions?” Yes. All his life he had wanted to make people laugh, but always the studio heads refused, saying that his image was one of a horror actor and the public would not accept him in any deviation from that role. This, he said, caused him great sadness as he knew that there was a good comedy actor within him but no one would give him the chance to prove this. “Now,” he sighed, “it is too late. I am too old to bring laughter.” We reminded him that he had made several comedy films, appearing with alongside the likes of the Bowery Boys, the Ritz Brothers and Abbott and Costello. At the mention of these movies, Lugosi smiled. “Yes,” he said, “many of these were very funny, but it was not me that brought the laughter. It was the talents of my co-stars. I still played the heavy or the monster. What I have always wanted was to be the source of the comedy, the comedian himself. I wanted to make the audience laugh.” 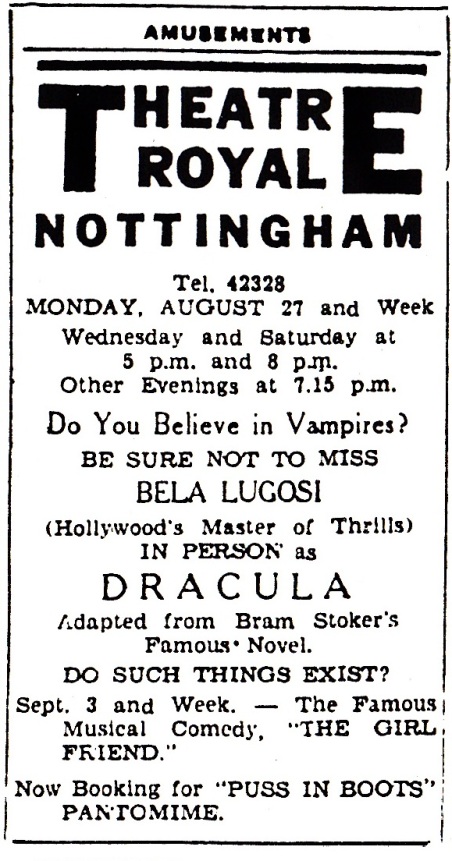 We asked Lugosi to confirm the correct pronunciation of his fore-name. We had (and still do) heard it variously pronounced as “Bella”,Beela” and “Bayla.” Which was correct? “None of these are correct!” he stated, rather surprisingly. With a mysterious smile, he extended his forefinger and wagged it a couple of times, then said, “The correct pronunciation of my name is…” a theatrical pause to increase the tension, “…Baylor.” We all dutifully repeated his name in the correct manner to which he grinned and said, “Yes, that is correct, Baylor is how it is pronounced in Hungary.” Then he spun round, and disappeared through the stage door with a backward wave, to prepare for that evening’s performance.

After this meeting we attended that evening’s performance of Dracula at the theatre Royal. Regrettably, I have lost the programme over the years and have also lost contact with my two friends from those long-gone days, but the memory of that evening is still pretty fresh in my mind. There was a reasonably full house and the atmosphere was high on anticipation but low on reverence. The audience was obviously intending to have a  high old time – a little similar to the average “Rocky Horror Picture Show” attendance.

The curtain went up to reveal a stark setting with a closed coffin centre-stage. Guffaws of laughter from an audience now in full festive mood. Suddenly, a bat flitted across the stage, along the tracks of very visible wire. Hoots of derision from the very naughty audience. I remember my heart sinking fast. This was not the tense, horrific evening to which I had for so long been looking forward. Suddenly, a creaking noise and the coffin lid slowly began to raise, inch by inch. A hand with a large ring upon the index finger wriggled out of the coffin and raised the lid further, finally pushing the lid completely back. The laughter of the audience mounted as, slowly, Lugosi sat up within the coffin before levering himself out of it. If he craved the laughter of the audience, he was certainly getting it. Having stepped out of the coffin, he then walked in a menacing way towards the audience. The St John’s Ambulance Brigade, in attendance, were now busily repairing the split sides of the audience.

Then a very strange thing happened. He reached the edge of the stage and stood there, his hands holding the cloak around him, eyes glaring balefully at the audience. One of his hands suddenly shot forward, bringing the edge of his cloak with it. A gnarled finger pointed towards the audience. His mouth opened wide, his lips curled back, and he emitted a hissing snarl. As though a switch had been thrown, the laughter of the audience ceased, abruptly. He maintained this pose for several seconds and then made his exit in a stately manner to the side of the stage. The stage remained empty for a few seconds and not a sound was to be heard from the audience as the curtain slowly closed prior to the commencement of the play proper. It was a wonderful example of commanding personality against tittering idiocy. The rest of the play proceeded to the respectful attention of the audience, apart from when the ubiquitous bat, making one of its several “horrific” appearances, suddenly stuck halfway through its flight. It  struggled frantically to free itself for two or three minutes before eventually flitting off stage, never to be seen again. This was obviously more than mortal flesh could stand and the audience erupted with gleeful mirth. That apart, the play proceeded in reasonable manner, the actors doing the best they could with the rather wooded dialogue.

The end of the play brought reasonably warm applause which increased considerably when Bela Lugosi took his bow. The problem was, of course, that even in 1951 it was becoming rather “old hat”, with little real action and no gore whatsoever. Despite its subject matter, the play was ceasing its grip and thrill. One only has to look at the subsequent Hammer Films treatments of these old horror legends, together with subsequent stage versions, to understand how far the rather static traditional treatment was falling short of the changing taste of the audience.

The Day I Met Bela Lugosi by Derek R. Pickering.

From A To Zee: Eric Lindsay, Bela Lugosi’s Last Renfield